A spritely game in Beaufort resulted in a well deserved win 1-11 to 0-10 for Glenbeigh over Ballymac. An opening onslaught from the Ballymac men threatened to put Glenbeigh to the sword but wasted chances kept the teams close with Ballymac leading 0-3 to 0-1. As the half wore on Glenbeigh used all their experience to edge in front and a late first half goal left them 5 points in front at the break. Ballymac roared into the second half with three unanswered points leaving 2 between the teams. However this was as close as it would get, Glenbeigh keeping the Ballymac men at arms length despite a valiant effort. Ballymac made a late surge to try and salvage a result but Glenbeigh finished well to win 1-11 to 010.

Membership 2019: Membership for Ballymacelligott GAA Club for 2019 is online only and the closing date is looming. We as a club must register our players and Members for 2019 prior to 31st March 2019. This means membership has to be as soon as possible to have the necessary registration done prior to 31st March.
Only a Full Member who has paid their annual Club subscription by the due date set by the Executive Committee of the Club (which shall be prior to March 31st) shall be eligible to vote at, nominate for, or seek election to the Executive Committee at any following General Meeting of the Club in the membership year. Only players who have paid membership can play for the club. All players, administrators and coaches/mentors have to pay membership. Membership can be paid via club web site: The link is on the front page. Membership can also be paid via the app Myclubfinances that is available from the app store. The online payment complies fully with data protection legislation.

UNDER 16
Our U16 team take part in Division 1 of t The Kelliher’s Toyota Tralee,sponsored U16 Central Regional League. The fixtures and teams in Division 1 are as i as follows:
We play our first game away V Laune Rangers on Monday 1st April at 6.30pm. 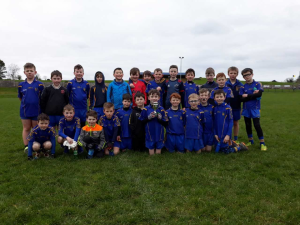 Ballymac U10 Boys had a big turn out Sunday on their first day back . They had a good training session on the morning , those to impress were Jamie Harrington , Conor Lynch, Darragh McMahon, Daniel Moriarty and Gearoid O Connor, and we also had player of the week included in picture.. 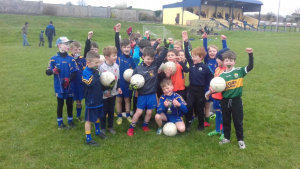 Well done to all the U8 boys who turned out for our first day back at training. They were practising their skills and coaches were really impressed with the talent. Player of the week is Aidan O’Connor. See you all next week.

Under 6
Our eagerly awaited academy will return on Sunday next 31st March for Boys & Girls at U6s at 11.00am in our main pitch. This year our Sunday Academy will run every Sunday morning without a break until October. We are looking forward to seeing all our future stars back with us in Ballymac GAA!!

Child Welfare and Protection Course
Our Club Children’s Officer Joanne Long has organised a second Child Welfare Course for those who have yet to complete this course. It will be held in our Club Rooms on Wednesday 3rd April at 7pm. Its for all club coaches and administrators dealing with underage players and teams : Secretaries and PROS etc This COURSE IS MANDATORY for everyone involved in coaching children. Anyone involved with children in our club who has not already done this course over the past three years needs to attend.

2019 COUNTY CLEAN UP: Green Bags available in The Half way Shop The eighth annual County Clean Up will take place this year on Saturday, 13 April and a call has gone to individuals, clubs and communities across the county to take part and help make the county spick and span. The Half Way Shop have the green bags etc. in stock at the moment. Volunteers can pick up these at their convenience and
collection points will be designated around the county to ensure that all litter gathered is disposed of.
Last year, some 5,500 volunteers were out and about on the day with the support of Kerry County Council and KWD Recycling as well as local organisations like Kerry GAA, Kerry IFA and Kerry ICMSA.
Colm ‘The Gooch’ Cooper will again be lending a hand this year and is helping to promote the initiative. The clean up day has grown in numbers year after year.
As a county we are very reliant on our reputation for a clean and litter-free environment and everyone has a role to play. A record 5,500 volunteers took part in the Kerry County Clean Up in April 2018 which saw 8,000 bags of litter collected, the highest ever tally.
Ballymac GAA Lotto Results from 18th March 2019
Venue: Kielduff Community Centre

Well done to Ballymac Community Games Futsal Team Congratulations to the Ballymac boys who progressed to the final of the community games U15 Futsal. Wins over Spa/fenit, Listowel and Lyre/duagh set up a final -winner tops the group- match against Ballyheigue. In a very tight match Ballyheigue won out 4-2. Well done to the team Skye Lynch, Jamie Lynch, Kieran Slattery, Jack Slattery, Niall Collins, Sean Rice, James Kenny and Diarmuid Galvin. We will play the county semi-final and final either next Sunday or Sunday week.
Best wishes to Bobcats Best wishes to our Ballymac Bobcats u14 Girls Basketball team who travel to Gormanstown Co Meath next weekend to partake in the All Ireland Finals. It is a great achievement by this team to reach this stage of the competiti