Round 8 of  The Senior County League

A scorching Saturday evening in Ballymac played host to a game that featured numerous swings and roundabouts but ended with the home team claiming a 2-15 to 3-10 victory. Brosna exploded out of the traps with two quickfire points before Ballymac chipped over their first score. Then Brosna took full control with an unanswered 1-1 to leave them with a five point advantage. It was an uphill task for the home men but they quickly settled establishing a strong foothold around the middle with clever interplay goign forward. The team in blue scored an astonishing 2-6 without reply to open up the game and give them a commanding lead. Brosna replied with a point and Ballymac were also suddenly reduced to 14 men for a second offence.  The home team led at the break 2-8 to 1-5 but in such sapping heat they knew they would be in for a tough second half. The teams would trade points with each other for the first 20 minutes of the second half before Brosna goaled to leave just 4 points between the teams. Another quick point reduced the arrears to a one score game but as before the Ballymac men responded well with two points to take time off the clock and extend the lead to 5 points. To their credit Brosna wouldn’t give up and a late penalty ensured a nervous last few seconds for the home team but they prevailed deservingly on a scoreline of 2-15 to 3-10

Our senior team are away to Annascaul next Saturday night at 7.30pm in Annascaul. We wish the team and management every success. All support greatly appreciated.

Minor team News
Our Minor team will take part in the Division 3 Central Region  Minor League in Mid July. The games start on the 18th July and our Minor  team is away to Sneem/Derrynane/Templenoe on that night.  The game is fixed fro Sneem for 7pm.
We wish the team and Management every success in the competition.

Ballymac GAA  wishes  to thank Karen O’Mahony from Castleisland Desmonds who handed in a wallet she found in car park last Sunday morning. The owner a Ballymac Club member is very appreciative and you made our day! Thank you.

Congratulations & Best Wishes
Ballymac GAA sends our congratulations to Peter Keane, his management and the Kerry Senior Team on a great win last Sunday in Fitzgerald Stadium. We wish the team and management every success when they play Donegal  in Croke Park at 4pm on Sunday next.

U12 Boys
Our U 12 team will play in the Munster Blitz in Fitzgerald Stadium Killarney on Thurday 18th July.
The day will consist of playing on the pitch for an hour and a Stadium tour with a guest player.

– Clubs will play 3 Games over the hour

This is a great experience for all our young players and we hope they have a very enjoyable day.

Our u14 Boys Blue and Gold teams were introduced to the crowd at half-time in the Senior Game on Saturday evening last to mark the achievement of their two victories in  the Co League.

Many thanks to the Senior Executive for giving the Boys this recognition.

On the field we played two games in the  Central Region in the past week.

The Blue team faced Churchill in what proved to be a ding dong affair with  both attacks having their scoring boots on.

The Gold team were also involved in a high scoring game with St Pats which resulted in a draw 4-13 apiece.

Our next game up for our U16s is away to St Marys/Renard on Wednesday 17th July in The County League.

U10 Boys
Our U10 boys will not have training again until 6.30pm in the main pitch on Wednesday  17th July.

U8 Girls
Our U8 girls will not have training next Sunday and will be back the following Sunday. Enjoy the break.

U8 Boys
A fantastic Sunday morning below in Ballymac for the U8. The boys put in a good hard shift and had plenty of water breaks. Kealan Burke was player of the week. We have no training next Sunday and will be back the following Sunday. Enjoy the break. 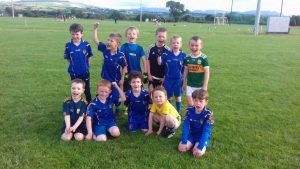 Our U7 and our U6 boys travelled to The Kerry Centre of Excellence in Currans on Monday night last to take part in an U7 Blitz. The Blitz was well organised and we thank all the organising committee from Kerry Coaching and Games. We had a great turn out on the night and all the boys played great football. Thanks to the commitment of players and parents we had two teams and both teams played three games each. The opposition were: Milltown/Castlemaine, Austin Stacks and Fossa. A big Thank you to the coaches who turned out on the night: John Leen, Bridget Leen, James Flaherty and Sheilann O’Rahilly. Also A big Thanks to Barry Lyons who came along and refereed three games. We really appreciate Barry turning up as without referees we would not have the games. We have our last and final U7 Blitz on Monday 22nd July and look forward to it.

U6 Boys and Girls

All our U6 boys and girls worked hard at perfecting hand passing and kicking last Sunday morning. Under the watchful eye of Coaches Frank, Kevin, Sinead and Brian they practiced all the skills despite the hot weather!  Well done to the  players  of the week this week who were Roisin O’Connor and Brian Curran.   Remember the water gum shields next Sunday morning! Coaching for U6s will go ahead on Sunday 22nd July for U6s at 11.00am.

For Health & Safety reason on every Sunday morning we ask all parents dropping off children to the academy , to park outside the Main Gates and walk into the pitch with children.   The Main gates will be closed as its too dangerous immediately after training to accommodate all the cars leaving etc. We thank you all  in advance for your cooperation and understanding.

Kellogg’s GAA Cúl Camps provide boys and girls – between the ages of 6 and 13 – with an action-packed and fun-filled week of activity during the summer holidays which revolves around maximising enjoyment and sustaining participant involvement in Gaelic Games.
Ballymac GAA Ground hosts two of the County Summer Camps as follows: 29th July to 2nd August & 12th to 16th August

Our U14 Girls Gaelic Football Community Games Team continue their preparation for their National Finals in U.L on August 18th.

We hope to supply gear and food to the Girls on the day, in recognition of their achievement.

Any business or individual wishing to contribute financially please contact John Palmer 087-2258894 all donations most welcome.

On a beautiful evening for football we entertained the Scartaglen ladies in a back game on home soil and what ensued was an excellent game of football, contributed to  partly  because it was a thirteen a side game, due to our tightness in numbers due to work commitments and holidays, leaving us short seven regulars. The visitors came out on top with at the end on a scoreline of 3-10 to 5-13. The eight goals mainly due to the openness of both defences due to the smaller numbers on the pitch. We now await confirmation on whether we qualified for the A or B county league final spot. Team; Ellie Sugrue , Roisin Long, Cait  Rice, Kate O Connor, Millie Luck, Holly Geary, Aisling O Connell, Alyssa Leen, Lisa Curran, Ellie Mac Elligott, Mary Ann Fleming, Emer Curran, Cora Savage .

Upcoming dates for the diary:

U12 blitzs will be on 16th July in Ballymac