This week our U16s and our U14s play in two Finals in Austin Stack Park.

Austin Stack Park has been used for the playing of games since well into the 19th century. It is the home of football in Kerry and many Kerry players past and present have made their debut here wearing the Green & Gold. It a great honour for both our teams to play in the hallowed ground of Austin Stack  Park. It is a fantastic venue for the young players and also for the mentors. At least one of our mentors has played himself  and trained teams and next week will be the first time he will be in the dressing rooms in Austin Stack Park. So  is a special occasion for both sets of players and mentors.

All our young players can say YES! I played the game for Ballymac and I played in Austin Stack Park! Best wishes to you all and we hope you enjoy this important occasion! 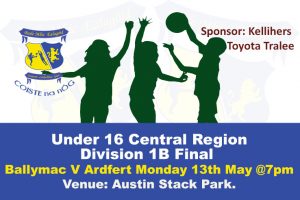 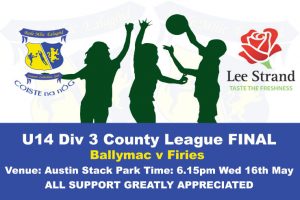 U14 County League Division 3 Final
Our u14 Boys face Firies in the Final in Austin Stack Park on Wednesday evening the 15th  May with a throw in time of 6.15pm.