A sun drenched evening in Ballymac ended in a well deserved 8 point victory for the home side over Dr Crokes B. Ballymac started well with two quick points on the board before Crokes levelled it up. The home team would then use their established platform at midfield to open up a three poitn gap but wasteful shots on goal left Crokes in the game. Allied to some smart kickouts and long range points with the breeze the Killarney men quickly rallied and a cooly dispatched penalty left them one point up at the break. Upon the restart both teams traded point but a goal chance spurned by Crokes would prove costly. Ballymac took control around midfield and reeled off 8 unanswered points to sway the game their way. Crokes would then have one more goal chance denied which would end any hope of a comeback. The final score 0-19 to 1-8 to the Ballymac men.

The next game in The Senior Football League is on the weekend of the 24th May when we play Beaufort in Beaufort.

Ballymac Junior team
Ballymac GAAs Junior team will take part in the County Junior League and the competition commences on Friday 17th May. We play in Group 4 and other teams taking part are St Michael’s Foilmore, Cromane, Currow, Firies, and Listry.
Our first game is away to St Michael’s Foilmore on Friday 17th May at 7.30pm . We await the Venue. All updates and on fixtures will be updated on our website and Facebook pages.
Minor Team
We are awaiting the fixture for The Tralee Board Division 1 League. Our minors will play Austin Stacks in the final. All updates and on fixture will be updated on our website and Facebook pages.

Coiste na nÓg News:
U17
Our U17s hope to take part U 17 9 a side Club Competition that The County Board will run in Mid to early June. The format will depend on the number of teams that are interested in taking part. If there are enough entries it is hoped to have a number of Divisions with the competition played over two or three nights. The possibility of clubs playing a number of games on a night and then qualifying for a finals night is been explored. This is a time of the year when U 17 players will not be involved with any other teams and this competition will provide games for these players. 9 a side football is fast, open and exciting and something different for the players. We look forward to taking part in the competition.

U14s
Our u14 Boys have a County Final to look forward to following their semi-final victory over Beaufort.
The first half was a closely fought affair as both sides had periods of dominance and this was reflected in the half time score which saw Ballymac lead on a 2-7 to 1-6 score line.
We got off to a good start to the second period with a goal,and some sterling work by our defence which restricted Beaufort to two points in this half saw us take control of the game. Another goal near the end sealed the victory on a 4-11 to 1-8 scoreline.
We now face Firies in the Final in Austin Stack Park on Wednesday evening the 15th with a throw in time of 6.15pm.
All support for the team would be greatly appreciated.

Austin Stack Park is the Venue for U16 & U14 Finals this week
This week our U16s and our U14s play in two Finals in Austin Stack Park. Our U16 team on Monday night and our U14 team on Wednesday night.
Austin Stack Park has been used for the playing of games since well into the 19th century. It is the home of football in Kerry and many Kerry players past and present have made their debut here wearing the Green & Gold.
It a great honour for both our teams to play in the hallowed ground of Austin Stack Park. It is a fantastic venue for the young players and also for the mentors. At least one of our mentors has played himself and trained teams and next week will be the first time he will be in the dressing rooms in Austin Stack Park. So is a special occasion for both sets of players and mentors. All our young players can say YES, at the end of their careers in 20 years or so, I played the game for Ballymac and I played in Austin Stack Park. Best wishes to you all and we hope you enjoy this important occasion! Ballymac Abú. All support for both teams greatly appreciated!

U12
U12s are training away and we are waiting on the fixtures for phase 2 of The U12 County League.

U10 Boys
Ballymac U10 Boys had a good turn out on Sunday morning, doing skills and match’s ,those to impress were Fionn Enright, Kyran Boyle, Liam O Rahilly, Jack Collins and Seadhna O’Briain.
The U10 Castleisland District Go Games Blitz take place next Thursday evening the 16th May in Ballymac starting at 6.30pm. This should be a great evenings football and everyone welcome to support our future stars. 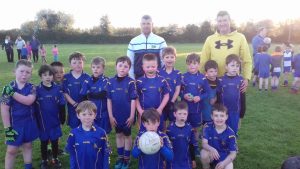 It was a great evening in Castleisland on Thursday the 9th May with Desmond’s holding their U8 Go Games. Ballymac boys were full of energy and played some mighty football. We had 2 full teams and they played 3 games each. Well done to all and thanks to Castleisland Desmond’s for hosting.
Another great training session down in Ballymac with our U8 boys played their hearts out again this Sunday morning. David Fealy showed off his skills and was our star player of the week. Well done to all the boys!

Under 6
On Sunday last the 12th May we had another great turnout from all the boys and girls at under 6s. If there is one thing these boys and girls bring to Sunday mornings in Ballymac GAA its enthusiasm! We had another fun filled morning. Thanks to you all for turning up and we will see you all again next week!

U14 Kerry Blitz
Congratulations to Rosin Rahilly and her teammates who travelled to Offaly on Saturday 11th May to represent the county in the All-Ireland Blitz. The girls played against Louth, Tyrone and Wexford. They enjoyed a very successful day of football.
U12 girls V’s Kilcummin
Ballymac U12 girls played Kilcummin on Monday 6th of May in Ballymac. The girls had a very good first half and were up by 2 goals and 3 points at the break. However, Kilcummin dominated the early part of the second half and with 4 minutes to go were 2 points up. Ballymac scored 3 points to take a one point advantage with 2 minutes left to play. A last minute free for Kilcummin made it all level on the night 5-11 apiece – fair result all round. Well done to all players.
Ladies Membership Deadline Looming for 2019: Membership for Ballymacelligott Ladies GAA Club for 2019 is online only. All players, administrators and coaches/mentors have to pay membership. Membership can be paid via club our club web site:- The link is on the front page. Membership can also be paid via the Clubforce that is available from the app store. The online payment complies fully with data protection legislation.
Clubs are reminded that the GAA registration deadline is the 31st May 2019.
U14 Girls Football
The Ballymac Girl’s Gaelic football team was the winner in Fossa Community Games County Finals on Monday 6th May. Ten teams participated, beautiful weather & excellent pitches. Some great closely contested games from all teams to decide the last four.
In semi-finals Ballymacelligott defeated Firies while Kenmare beat Beaufort. Final 1st Ballymacelligott, 2nd Kenmare, 3rd Beaufort, 4th Firies. Congratulations to the Ballymac Girls and their mentors. It’s great to be off to Mosney with Ballymac representing Kerry!
Kerry LGFA Club & County Night at the Dogs
Kerry LGFA are holding a fundraising Night at the Dogs on Saturday 25th May. Each club will get 50% of sales from their tickets. The theme of the night is “Clubs of Kerry” so it would be fantastic to see as many Ballymac girls there proudly wearing their club colours as possible. Also on the night is a relay race where 4 girls (u12/u14) from each club will race around the track for the title of club relay champions. Each club can enter as many teams as they want.
Face painting, bouncy castle, live music, raffles etc. will also form part of the night. Kerry players will also attend for pictures etc. It’s sure to be a great night.
Tickets are available from all under age coaches.

Ballymac GAA Lotto Results from Monday 6th May
The Lotto draw this week took place in Ballygarry House Hotel .
The numbers drawn were: 3, 9, 10 and 18.
There was no winner of the Jackpot of €2,700.00
Congratulations to the following Lucky Dip (€30.00) winners:
1. Wesley Maher, Tonreigh, Kielduff.
2. Gerard Collins, Reamore.
3. Bernard Cassidy C/O Paula Silles.
4. Lorraine McIntyre C/O Katie Leen
5. Martina Culloty C/O Mike Sweeney.
Sellers Prize: Paula Silles
We are very grateful to our Lotto Sellers and All Our Lotto supporters.
Next Weeks Draw takes place in Kielduff Community Centre on Monday 13th May when the Jackpot is €2,800.00