Senior Team
Congratulations to our senior team who put in a great win against St Michael’s Foilmore Sunday afternoon at home.
Match Report
Ballymac 3-12
St Michael’s Foilmore 0-7.
Ballymac played host to St. Michaels Foilmore on Sunday at 2.30 in round 2 of the Premier Junior Championship.  On the day Ballymac were much stronger than the visitors and took control of the game from the start. 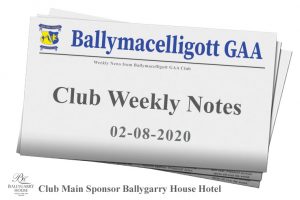 The score at half time was Ballymac 2-6 St. Michaels Foilmore 0-2.
St Michaels Foilmore tried hard in the second half to carry the game to the Ballymac boys.
However some good saves by Brian Lonergan and a missed penalty by the visitors did not improve the score line.
Ballymac ran out winners on a score line of 3.12 to St Michaels Foilmore 0.7On Sunday next the Senior Squad and Management travel to Brosna to play the home side and that game is at 2.30pm. The game will be live on Ballymac GAA Twitter page with a live feed from Twitter on our web site www.ballymacgaa.com and also regular updates on Ballymac GAA  Facebook pages.
Our Club did us proud in every respect on Sunday at home. Thanks so much to all our supporters who have been so understanding with tickets etc during the last while. The layout of the grounds with hand sanitizers was faultless complete with signage and plans for placing if supporters under social distance. Members and stewards worked so hard to get it right on the day for everyone’s safety and well-being. Thanks very much to everyone who helped in any way this afternoon!!
Míle Buíochas gach éinne!!!
Ballymac Abú

Returning from Abroad? Please read this notice.
We also want to take this opportunity to remind all clubs, that players who are returning from abroad must follow the Government regulations in terms of restricting their movements for 14 days on their return to Ireland – any player in this situation SHOULD NOT return to training or games until the 14-day period has expired.

Notice for spectators and supporters
Spectators should be aware that all the risks posed from Covid-19 cannot be eliminated, including attending GAA games but that essential control measures have been put in place to reduce risks for members.

St Kieran’s Minors
St. Kieran’s Minors Team will take on St. Brendan’s in the First Rd of The Keane’s SuperValu Minor Football Championship on Monday 3rd August. The venue is Na Gaeil and the game is at 7pm. Best wishes to our club players who are part of the panel:
Adam Joy, Sean Horan ,Conor Brick ,Donal Daly ,Maurice O’Connell , James Kenny & Luke O’Connell .
The Minor Football Championship which will be played at U17 this year. It is a straight knock out and 16 teams will compete in the competition.

Junior Team
Our Junior team play in The County Junior League in August. Our team play in Group F with Listowel Emmett’s, Annascaul and Austin Stacks C. The first round is on Friday 14th August at 7pm when we travel to Connolly Park to play Stacks. The remaining games are as follows:
Friday 4th September Ballymac V Annascaul at 7pm

Minor Ladies
A momentous occasion as BALLYMAC Ladies Minor Team made their debut in the premier league, with our first game in Division 1 County League. And Girl, did the ladies prove that they belong here in the higher echelons of Ladies Football.

Where the scoreboard does not reflect the actual fierce competition that we witnessed out on the field of play, against a Rathmore side who have been playing in Division 1 since they were 11. In the end it finished Rathmore 4-10 Ballymac 1-6.

Rathmore opened the proceedings very strongly to go 2 points to no score up in 5 minutes, but the Ballymac ladies settled well and Lisa Curran put over two scores after great work by the team moving the ball up the field, by the water break it was 4 points to 3 in favour of Rathmore. However in the that time, the Ballymac ladies were unfortunate to miss a number of chances that would have had us leading at that stage.

After the water break however Rathmore ladies turned the screw and hit us for 2-2 in a five minute spell, the second goal was a penalty after a great save by Lorna Daly in the Ballymac goal, Lorna almost kept out the penalty, deflecting it left, but it slipped in at the left hand post. However, our ladies did not lie down, as back they came immediately with great work to move the ball down the field and Ella Quirke finished it to the net.

The second half began with a well worked Rathmore goal straight from the kickoff, with really knocked the confidence of our ladies and it would take another 7-8 minutes for us to recover. In this time Rathmore put over another 2 points and both goalkeepers for Ballymac, Lorna and Kerry Hennessy made a number of good saves in this period. Ballymac then stepped up the pace of the game and hit Rathmore with three points in succession Cora Savage with 2 from frees after some forceful play by Keelin Enright and 1 from play. Rathmore finished the scoring with another goal from play as we got caught a little two far up the field.

Best for Ballymac were Eve Creedon who had an outstanding game at midfield, Roisin Rahilly excellent in defence and determined when driving forward with the ball , Cait Rice worked really hard in a defence that was under pressure at times and Maryanne Fleming in linking up play along with Ellie McElligott.

Our U14 Girls began their Co League Division One campaign on Sunday last with a trip to Connolly Park to play Austin Stacks.

Early exchanges were even but a couple of points late in the quarter saw the home side lead at the first water break on a 1-6 to 1-1 scoreline. Rachel Creedon with the Ballymac goal.

Stacks got off to a good start in the second quarter and by half time had established a 3-6 to 2-1 lead with Orla O Connor raising the green flag for Ballymac.

Our Girls proved more than a match for their opponents in the third quarter with both sides scoring two points.

Another goal from Orla gave us hope but Stacks point scoring ability saw them run out deserving winners.

Amongst those who impressed for Ballymac on the day included goalkeeper Aoibheann Broderick defenders Alice Brosnan Ashlinn Baily Anna Collins and Niamh Rice.

Rachel Griffin put in a solid hour at midfield in her first match back after a layoff.

Our next outing sees us welcome ISG to Ballymac for Round 2 on Sunday next.

COISTE NA NÓG
Please note it is the responsibility of all parents to ensure the children use the sanitizing stations provided at every training session and games before and after each session. Once every parent ensures their child/children use it then everyone will be safe.

Academy
Each Sunday morning and at any training session mid-week parents are asked to personally drop kids off to the designated club official outside the gate and give your contact details. There are just a few who have not paid your membership and we ask parents ensure payment is made immediately as your child will not be covered by insurance. It’s important that you fill in the health questionnaire before every session or your child will be be allowed train.

U8 Boys
Well done to the U8 boys who trained on Sunday on the field. The coaches are seeing huge improvements. The boys practised possession and kicking drills.

Daniel Maher and Dara Leen are deservedly players of the week.

Ballymac U10 Boys had a challenge game against Milltown/Castelmaine last Thursday evening at home  with both U9/U10 doing very well in both games .
We had a big turn out for training on Sunday morning and all are looking  forward to our game away to Na Gaeil next Thursday evening.  Ballymac Abú

Our U12 boys travelled to Kerins o Rahilys for round 3 of the County League on Sunday.

It was a good day in the office for both of our boys teams recording comprehensive victories over the strand road sides.

As coaches we would like to commend all players on both teams for their dedication to training and their determination to improve.

The superb match day performances to date are just reward for their hard work, focus and team ethic which is all down to the players themselves.

We start as we mean to go on and look forward to more challenges ahead and our continued improvement as Blue and Gold Ballymac teams.

Our u 16s   traveled to Connolly Park on Monday night to take on the locals in Round 2 of the county league .

An early point from Maurice O’Connell got us on the score board  but Stacks were soon level minutes later . The Rockies , playing with the aid of a slight breeze , scored two goals of their own to race into a six point lead.

However Ballymac responded well with a goal from Michael Prendergast ,  and further points from Donal Daly & Maurice oO’Connell had us back in the game .

A further goal from Austin Stacks was cancelled out when Michael Prendergast was dragged down in the square and upped stepped Andy Rogers to duly dispatch the ball to the back of the net . The Rockies replied quickly with a goal and 4 points .

James Kenny pointed   with a fine solo effort , and immediately afterwards Skye Lynch made a telling run through the Stacks defense to score another point for Ballymac to leave the half time score Ballymac 2 05 , Austin Stacks 3 07 .

Ballymac battled hard in the second half and Stacks were finding it much harder to penetrate our defense . Andy Rogers ,Sean Rice ,Eoin Creedon, Luke & Aidan Horgan were outstanding.
Niall Collins had the ball in the Stacks net  early in the second half following a great block down , however the Rockies replied with points of their own to keep their nose in front . A wonderful Goal from Gary Lynch cut the deficit to 3 points & lead us in for a grand finish with 5 mins left . However Stacks replied with further points to run out winners on a scoreline of 3 15 to 4 06 to Austin Stacks.

Congrats to Ballymac on a wonderful performance. Thanks to Austin Stacks for a fine sporting game .

Thanks to all parents who supported us on the night .

Play Ball Lotto
The Draw for Play Ball The Ballymac GAA (Interim Lotto )  took place on Tuesday 28 July.
The numbers drawn were: 10,20,6 and 14.
There was no winner of the Jackpot of €680.00
The lucky dip winner was Veronica O’Donnell
Thanks Veronica for your support.
This week Veronica gets a  Gift Voucher to the value of €20.00  for the Half Way Shop.
We thank Pat McCarthy & The Half Way shop for supporting Ballymac Play Ball Lotto.
We thank everyone who supported Ballymac GAA Play Ball Lotto this week .
All the money raised goes towards the club upkeep.
Next weeks Jackpot is €700.00 and the draw will take place on Monday 3rd August
You can buy your ticket for next weeks draw  by clicking on this link now