First round of The Senior County league

Ballymacelligott played host to Glenflesk in the division 2, round 1 of the county league. This game was played on Sunday at 2 o clock and the terrible weather conditions made good football impossible. The first half was an even enough affair with both sides exchanging points throughout the thirty minutes. On the stroke of half time Ballymac took advantage of an error made by the Glenflesk defence when clearing the ball. The result was an easy tap to the net for the home side . This left the score at half time Ballymacelligott 1.5 Glenflesk 0.5
Lady luck continued to shine on the home team at the start of the second half. The second half was just two minutes old when the Glenflesk goalie lost possession when clearing his lines and again the result was an easy tap in goal for Ballymac. Midway through the second half the wind rose and the hailstones started to come down which made conditions very poor. Glenflesk were then dealt a killer blow when their centre back was sent off for a second yellow card offence. Ballymac went on to score 1.4 to Glenflesk’s 0.3. The final score was Ballymac 3.9 to Glenflesk 0.8

ST PATS 1—6 BALLYMAC 5—15
Blennerville was the venue for our 3rd County League game against St Pats. Nine players got on the scoresheet for us including Ciaran Coggins with two goals and some excellent free taking from Adam Joy. We were 5 points to two up after 20 minute’s , 2 points each from Dara Broderick and Adam Joy, one from Jonathan Lowe. .Brian Cassidy put Ciaran Coggins through for our first goal followed by a massive point by Dara Broderick. Donal Daly pointed before Sean Horan came in along the end line passed to Ciaran Coggins who finished to the net. Ciaran then turned provider to Donal Daly for our third goal. We were 3—7 to 0-3 ahead at the break. On the restart D Broderick picked out Dylan McHugh with a long range pass and he applied a stunning finish to the net. Ballymac got further points from Adam Kelly, D Broderick, and two from Adam Joy, while at the other end Eoin Kenny brought off a fine save. Adam Joy (45”), Donal Daly and Brian Godley (2) pointed for us while a mini revival by Pats saw them score 1-2 in about 5 minutes. Brian Cassidy finished our scoring with a well taken goal and so we now have 4 league points.
A tough challenge awaits next weekend as we play Ballyduff at home in this competition.

Membership 2019:
Membership for Ballymacelligott GAA Club for 2019 is online only. All players, administrators and coaches/mentors have to pay membership. Membership can be paid via club web site: The link is on the front page. Membership can also be paid via the app Myclubfinances that is available from the app store. The online payment complies fully with data protection legislation. It is mandatory that all coaches need to be Garda Vetted and need to be members of our club. The e_Vetting can be done online and the link is also on the front page of our web site.
Clubs are reminded that the GAA registration deadline is the 31st March 2019. All Clubs must register their players and Members for 2019 prior to 31st March 2019.
Only a Full Member who has paid their annual Club subscription by the due date set by the Executive Committee of the Club (which shall be prior to March 31st) shall be eligible to vote at, nominate for, or seek election to the Executive Committee at any following General Meeting of the Club in the membership year. Only players who have paid membership can play for the club.

U14
Our u14 Boys played their final Town League Division One game on Sunday morning last when they took on Churchill in Ballymac.
Played in driving wind and bitterly cold conditions credit is due to both sides for serving up a very entertaining game.
At the final whistle, it was the Churchill boys who edged it on a scoreline of 1-9 to 2-3.
Our lads focus now turns to the Co League where we will compete in Division Three.
This competition is due to begin in the next few weeks.

Under 12
This year our Club entered the draw to take part in The Croke Park U12 Blitz. Unfortunately, we were not successful this year. We have some great memories of taking part in the past and we wish the successful Kerry Clubs in the draw a memorable and exciting day.
U12 Tralee League:
Ballymac Blues 4-03
Austin Stacks A 1-12
Ballymac Blue team welcomed Austin Stacks to Ballymac on Saturday evening. Goals win games but in this case, goals draw games. In a hugely contested game, a brace of goals each from the ‘fox in the box’ Luke Griffin and Sam Slattery left the game finishing 4-3 to 1-12. These goals and an impressive Cian Harriss between the posts gave the home side a valuable point. Thanks to the visitors on a greatly contested game and here’s looking forward to many more titanic battles in the year ahead.
Ballymac Gold Team 5-03
Churchill 5-12.
Our Gold Team traveled to Churchill on Saturday afternoon. A high scoring game in which both teams played with skill and got some lovely scores. Our goals were scored by Michael Quirke, Padraig Reidy (2), Paddy Lucid and Eoghan Joy.
A great bunch of boys who fought hard and never gave up.
Our Gold team play John Mitchel’s in John Mitchel’s on Saturday next at 3pm

U6, U8 and U10
Our eagerly awaited academy will return on
· Sunday the 24th March for Boys & Girls at U8s and U10s at 11am on our main pitch
· and Sunday 31st March for our U6 Boys and Girls: at 11.00am in our main pitch.
This year our Sunday Academy will run every Sunday morning without a break until October. We are looking forward to seeing all our future stars back with us in Ballymac GAA!!
St Patrick’s Day Parade 2019
Ballymac GAA has taken part in the St Patrick’s Day Parade in Tralee for many years. It has now become an Annual event for children, mentors, and parents.
We are asking all parents and children to once again make a big effort to accompany Ballymac Coiste Na nÓg in this year’s St Patrick’s Day parade on Sunday the 17th March.
It is a great opportunity for us to show our pride in our club and to wear our club colours of Blue and Gold with pride.
So let’s be proud of our club and come out in force with our club colours to the fore. We will announce assembly point and times later in the week on our web site and Facebook page later in the week.
Child Welfare and Protection Course
A Sincere thanks to all the coaches who took part in the Child Welfare Protection Course on Wednesday night last. It was great to see the course fully subscribed by Coaches from U6 to Minor. The Club wishes to thank County Child Welfare Officer Bernie Reen and William Evans for coming to the club and presenting the Course. The night was once again superbly organised by our Club Children’s Officer Joanne Long and Joanne is organising another one in the next few weeks for those who have not yet attended. This COURSE IS MANDATORY for everyone involved in coaching children. Anyone involved with children in our club who has not already done this course over the past three years needs to attend. 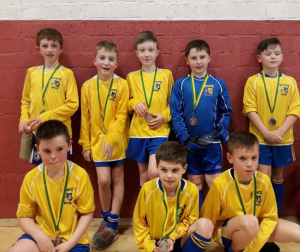 Scoláireachtaí Gaeltacht;
Forms available from Runaí of Club 087-9795220 – closing date Friday 29th March. Scholarships are only awarded to youth club members aged 12 to 17 years and in Post Primary education and are fully paid up members of our club.

Scór Na bPáistí
Scór na bPáistí District final 2019 got off to a very colourful start with a very appreciative audience in Knocknagoshel last Saturday night. Ballymacelligott GAA was represented in four categories by some wonderful young talent – some on stage for the first time.
Representing Ballymacelligott :
RINCE: Emma, Ri-Ann, Conor, Katie, Molly, Laura, Maggie & Rachel.
Ballymacelligott Ladies Football: RINCE: Alannah, Daisy, Emily, Lily, Megan, Sinead, Regan & Tadhg.
SOLO SINGING: Alicia O’Connell & Ciara Murphy.
RECITATION: Maggie Scanlon. BALLAD GROUP: Ciara, Saoirse and Laoise Murphy, Katie Landers & Eoin Moriarty. All our participants did themselves & their club proud. Unfortunately only one from each category goes through to the next level.
ALL THE VERY BEST to those going forward to the semi-finals in Castleisland on Saturday 23rd March. Scór Abú
Scór Sinsí Munster Final
Scór Sinsír Munster Final, held in City Hall, Cork last weekend was a spectacular occasion. The level of competition was very high. See GAA Scór Oifigiúil Facebook page. Adjudication was difficult in each & every category, with each county deserving of the top prize. This All-Ireland will be held in The Travellers Friend Theatre, Castlebar on Saturday 13th April. Scór Abú