A lovely Summer’s evening, Saturday 29th June,  in Castleisland resulted in a thrilling draw between Ballymac and Castleisland Desmonds on a scoreline that finished 3-11 apiece.

The visiting side started in fine form with some well worked team scores to leave them 3 points to 1 up after just a few minutes of play. Desmonds soon steadied themselves and with the aid of a strong breeze worked their way back into the game. A flurry of scores including a penalty left Desmonds 1-6 to 0-4 in front but a penalty just before the break left just 2 points between the sides, 1-6 to 1-4 in Desmonds favour.

A Desmonds goal just after the break left it with 5 points in the difference and a huge uphill challenge for Ballymac. However, the game was about to turn on its head. Desmonds were reduced to 14 men after two quick yellow card offences and Ballymac scored 2 goals in the space of a minute to leave them a point ahead. Some brilliant defending, smart use of the extra man and good kick passing opened a three point gap before a marvelous team effort by Desomnds resulted in an equalizing goal.
Again Ballymac responded in kind, kicking 3 of the next 4 points to leave them ahead by two entering injury time.
However, 2 late Desmonds frees tied the game, the latter being a wonder free by their goalkeeper worthy of tying any game. A magnificent match which truly neither team deserved to lose.

Senior team
Our Senior team play Beaufort in a back game in The Senior Football League on Saturday next the 6th July in Beaufort at 7.30pm Keep on eye on our Facebook, Twitter and web pages for any fixture changes later in the week.

Ballymac B team on Saturday

Our B teams next outing is on Friday next the 5th July whent the lads travel to Firies  play Firies. Keep on eye on our Facebook, Twitter and web pages for any fixture changes later in the week.

Our Minor team will take part in the Division 3 Central Region  Minor League in Mid July. The games start on the 18th July and the other teams in the group are:  Ardfert, Annascaul/Lispole, and Sneem/Derrynane/Templenoe. 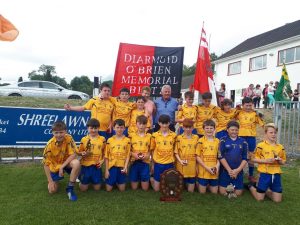 Pride of plays this week goes to our r U12 boys who completed phase 2 of  Division 1 of The County League andfinishing joint winners of Div 1A . They were also crowned overall winners of 1B and captured the annual Newmarket Blitz.

An extremely busy but fruitful week for U12 boys over the past week started off last Saturday 22nd with a memorable trip to Cork, playing Douglas in challenge games and then onto Pairc Uí Chaoimh to watch Kerry win a Munster Title. Many thanks to Douglas for the invitation and hospitality shown on the day, two fantastic games of football were played with 31 boys from Ballymac pitching themselves against the best in Cork.

Sunday 23rd saw both teams on the road again, this time it was an away fixture to An Ghaeltacht in our final round game of Div 1 County League.

This game started at a frantic pace with both teams playing to the highest standards and some excellent scoring especially the point kicking from both sides to leave the half time score at 2 10 each.

The pace of that half along with the previous days outing caught up with these boys in the second half where An Ghaeltacht showed that bit extra freshness and went on to when comfortably on a score of 5 23 to 4 10.

However Ballymac had enough done throughout this fantastic campaign to be guaranteed to finish joint top of Div 1A with local rivals Austin Stacks, Congrats to all involved especially to these amazing group of players who give it there all every week.

Our Gold Team produced the perfect 5 wins from 5, dominating all opposition to top Div 1B of County League. Going into Ghaeltacht game these boys had already secured top spot but still put in another fantastic display outscoring and outplaying the opposition. Fantastic achievement for these boys who as a team always play for each other and well deserve to top Div 1B.

Saturday 29th saw us travel to Newmarket Co. Cork for the annual Diarmuid O Brien memorial blitz which is always a highlight of the U12 football season.Grouped with Knock/Brosna, BK Plunketts and Sliabh Luchra Gaels it was top team out of group who qualify for final.  With two good wins over Knock/Brosna and BK Plunketts, it set up a semi-final game v Sliabh Luchra Gaels who also won 2 games. This game was quite a physical battle and took all of Ballymac’s reserve to get over the line, topping the group thus qualifying for the Final where we played Croke Rovers. First half of the final proved to be a tight contest with both teams defensively on top but Ballymac proved their class and saved the best football till the end to produce a scintillating second half to ensure the trophy would head back over the border. Matthew Rogers picked up man of the match award and Luke Silles lifted the Diarmuid O Brien Trophy to the joy of his team mates and in his speech acknowledged and thanked all the O Brien Family and Newmarket GAA for a wonderful day of football in memory of Diarmuid O Brien.

U14Boys:
Our u14 Boys Gold team got their Central Region campaign off to a good start with victory over Miltown/Castlemaine on Monday evening last week.

The foundation for the victory was laid in the first half when we built up a good lead,in the second half we continued to dominate running out victors on a 5-17 to 5-5 scoreline.

Our Blue team are next in action as they travel to Ardfert on Monday evening July 1st for a 7pm start.

U16 Boys
Our u 16 s played Ardfert in round Two of the County League Division Two in Ballymac on Wednesday night.
Our boys got off to a great start and looked really sharp in the first fifteen minutes , we we were leading 1 03 to 0 02  after this quarter.  Our goal came from Adam Joy a fine individual effort .
A beautiful point from the left boot of Donal Daly put us further ahead . Points followed from MauriceO’Connell, James Kenny & Adam Sheehy and when Mark Brick struck for Goal , we were leading by 2 07 to 1 02 at the interval .
In the second half we continued to push on with a great point from Adam Sheehy. Ardfert didn’t give up and were soon back in the game with two goals and now we knew we were in for a grand stand finish . A great burst up the field by Jamie Sugrue, led to him slotting the ball over the bar for an inspirational score to give the boys a lift . Ardfert kept the pressure on and it was down to three points on the 60 th minute .
Ardfert reduced to two soon after , but when Donal Daly raced up field to score another point , we looked to be out of sight into injury time . However Ardfert replied with another point to leave two in it again . In the last attack with six minutes into injury time , Ardfert scored a goal to give them a one point lead . Ballymac were so unfortunate to loose this game , as this was their best performance of the year . Every player can be proud of their performance and a repeat of this performance will have us competing for silverware shortly . Special mention must go to Jamie Sugrue, Adam Sheehy,  Denis Brosnan, Adam Joy,Brian Godley, Conor Brick & Sean Horan . Well done to all and thanks to all parents for their support and to Ardfert for a fine sporting Game . Well done to Ardfert .
Our next game up for our U16s is away to Fossa on Wednesday 10th July.

U14 Girls in Community games in Munster Semi Final.

Congratulations to our u14 Community Games Girls Football team who qualified for the Munster semi-final with a good victory over Feonagh/Castlemahon in UL on Saturday last.

They now have a Munster semi-final on Saturday morning next in Na Gaeil when they take on Doora/Barefield from Clare at 10am.

The Final will also be played on Saturday in Na Gaeil with Skibbereen(Cork) and Bansha(Tipperary) in the other semi-final.

All support for the team would be greatly appreciated.

U10 Boys
Due to coaches on holidays over the next two weeks our U10 boys will not have training again until the 17th July.

U8 Boys
A fantastic effort from all the boys this morning at training. Nothing beats a bit of wet weather to get the boys up and running around to keep warm. Well done to those who togged out. Jack Hobbard is our star player of the week.

We look forward to seeing the boys play in the Scartaglen Go Games this Friday evening at 7pm. Ballymac Abú.

Well done to the girls who trained on Sunday morning in difficult conditions. The main pitch is booked for U8 girls academy next Saturday evening from 4pm to 5pm instead of the usual time on Sunday. We will resume the following week at 11am on Sunday.

U6 Boys and Girls
Our U6 boys and girls worked hard at learning hand passing and kicking the ball on Sunday morning. They also had some time for some fun in the rain!
Last Monday our U6 boystook part in a County Board U7 Blitz with the boys from U8s.
They all  had a beautiful evening over in Currans at the Centre of Excellence for the U7 blitz. The boys got to check the place out and see where some of their heroes train. We had 2 teams and the boys got 3 games each. They got stuck in and showed off their skills. Thanks to the boys themselves, parents and coaches. Ballymac Abú.

For Health & Safety reason on every Sunday morning we ask all parents dropping off children to the academy , to park outside the Main Gates and walk into the pitch with children.   The Main gates will be closed as its too dangerous immediately after training to accommodate all the cars leaving etc. We thank you all  in advance for your cooperation and understanding.

Kellogg’s GAA Cúl Camps provide boys and girls – between the ages of 6 and 13 – with an action-packed and fun-filled week of activity during the summer holidays which revolves around maximising enjoyment and sustaining participant involvement in Gaelic Games.
Ballymac GAA Ground hosts two of the County Summer Camps as follows:

This weeks lotto draw took place in the Ó Riadas

Sellers Prize –Tony Marshall
Next Weeks Jackpot is €3,500 and the draw will take place in  Ballygarry House Hotel.
Tickets for our Lotto are for sale at The Half Way Shop & Bar, O’Riodas, Boyles Hardware Clash and Horan’s Fruit and Veg, The Horan Centre Tralee. Tickets can also be purchased on line at Ballymac GAA web site. We thank all our lotto sellers and supporters. All your support is greatly appreciated.

The Senior Ladies welcomed Abbeydorney on Sunday the 30th of June.

Next Sunday the ladies will welcome another North Kerry team, Clounmacon, at 8pm. All support welcome. 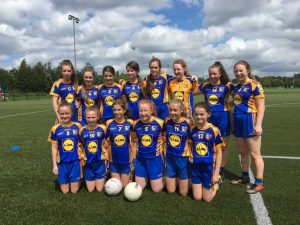 The girls progress through to Munster finals in Tralee next Saturday 6th of July.