Another final this weekend for the Ladies Club.

💙💛 Good luck to our U14 girls who face play Austin Stacks in Connolly Park on Sunday 20th September at 2pm in the Shield Final of the Division One of the Trophyworld Co League. 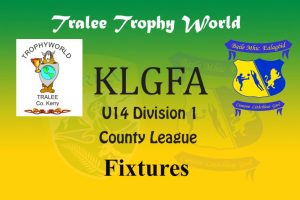 Following good victories over Cromane and Beaufort in the last two weekends our u14 Girls welcomed MKL Gaels to Ballymac on Sunday last 6th September in Division One of the County League.

The first half proved high scoring with the away side leading at the break 3-8 to 3-2.Sarah West,Aoife Sweeney and Kate Collins scoring the Ballymac goals.
The third quarter saw us dominate possession but our failure to convert the many chances which came our way meant we still trailed going into the final quarter. 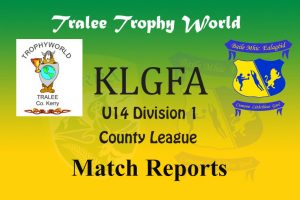 MLK Gaels struck for late goals to seal the victory while a Jill Quirke goal proved a consolation score for Ballymac.
Final score MLK 6-9 Ballymac 4-3.
Best for Ballymac were goalkeeper Aoibheann Broderick who brought off some wonderful saves, Alice and Rose Brosnan,Alexa Weiss,Ashlinn Baily and Laura Kelly.
Best wishes also to Maire Culloty and Laura Sugrue who are currently out of action due to injury.
Next Sunday we play Glenflesk at home

Our u14 Girls returned to winning ways on Sunday evening last when they had a good victory over Cromane in Glenbeigh in Round 4 of Division One of the Trophyworld County League.

Exchanges were tight in the first quarter but a Laura Sugrue goal before the water break saw us lead on a 1-3 to 0-3 scoreline.

We proceeded to dominate the rest of the half and goals from Laura Sugrue and Orla O Connor gave us a 3-5 to 0-3 halftime lead.

By the end of the third quarter we had further extended our advantage 4-8 to 0-5 with Kate Collins raising the green flag.

However the home side came storming into the game and added 2-3 to leave just 6 points between the sides midway through the final quarter.

A Rachel Griffin goal helped ease the Ballymac nerves and while Cromane goaled from a penalty with the last kick of the game our Girls deservedly held out for victory on a 5-9 to 3-9 scoreline.

Overall this was an outstanding team performance with every Girl putting in a massive effort to ensure victory.

Next weekend sees us on the road yet again, this time Beaufort provide the opposition on Sunday next.

Ballymac u14 Girls made the journey to Waterville on Sunday evening last to take on Southern Gaels in Round 3 of the Trophyworld Division One Co League.

Played in near perfect conditions it was the home side who dominated the opening quarter and led at the end of it on a 2-3 to 0-3 scoreline.
Scores were at a premium in the second quarter with just one point scored by the South Kerry side.
Our Girls then proceeded to play their best football of their season so far in quarter three and at the last water break had reduced the deficit to just three points(2-5 0-8).
The massive effort our team put in took its toll early in the final quarter as two Southern Gaels goals put them firmly in the driving seat and eventually they ran our winners on a 4-10 to 0-11 scoreline.
However our Girls can hold their heads high as they fought right to the end against a very good home team.
On the night Aoibheann Broderick was outstanding in goals making some brilliant saves while in front of her Anna Collins,Maire Culloty,Laura Kelly Orla O Connor and Alice Brosnan can be very pleased with their performances
In attack Kate Collins Laura Sugrue Sarah West and Katie Landers performed best.
Many thanks to the parents for making the journey and for their support of the team on the night.
On Sunday next we are on the road south again we travel to Glenbeigh to play Cromane with a 6pm throw in

Our u14 Girls team took in Inbhear Sceine Gaels on Sunday evening last in Ballymac in Round 2 of Division One of the Trophyworld Co League.

The Ballymac Girls dominated this game from the first whistle and the result was never in doubt.

Laura Kelly Maire Culloty Aoife Sweeney and Rose Brosnan stood out in defence while special mention must go to forwards Laura Sugrue Emma Daly Rachel Creedon Sarah West Katie Hobbert and Katie Landers who were a constant thorn in the side of the ISG defence.
Final score Ballymac 7-15 ISG 1-7.
Next Sunday we make the journey to South Kerry to take on Southern Gaels in what is sure to be a tougher outing

Our U14 Girls began their Co League Division One campaign on Sunday last with a trip to Connolly Park to play Austin Stacks.

Early exchanges were even but a couple of points late in the quarter saw the home side lead at the first water break on a 1-6 to 1-1 scoreline. Rachel Creedon with the Ballymac goal.

Stacks got off to a good start in the second quarter and by half time had established a 3-6 to 2-1 lead with Orla O Connor raising the green flag for Ballymac.

Our Girls proved more than a match for their opponents in the third quarter with both sides scoring two points.

Another goal from Orla gave us hope but Stacks point scoring ability saw them run out deserving winners.

Amongst those who impressed for Ballymac on the day included goalkeeper Aoibheann Broderick defenders Alice Brosnan Ashlinn Baily Anna Collins and Niamh Rice.

Rachel Griffin put in a solid hour at midfield in her first match back after a layoff.

Our next outing sees us welcome ISG to Ballymac for Round 2 on Sunday next.

The full list of fixtures for the girls in this competition are as follows.