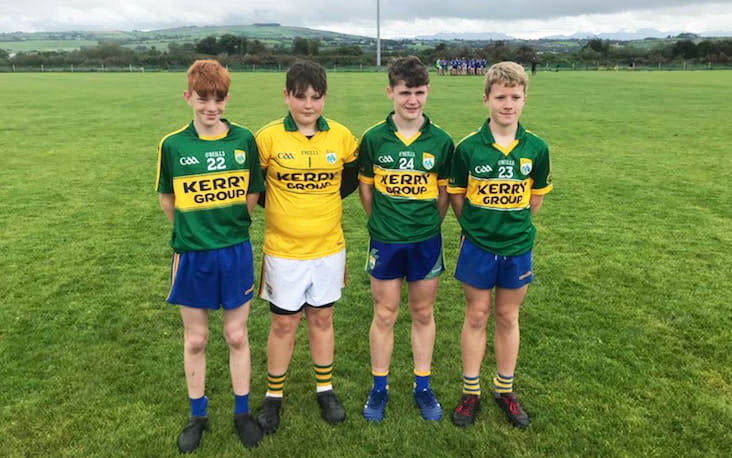 Last Sunday Ballymacelligott GAA hosted the junior premier game Fossa V Ballyduff. Both Ballyduff and Fossa supported our lotto on the day and we wish to sincerely thank them for their generosity and kindness all day. It was great to have both Paudie and David Clifford gracing their mother Ellen’s home pitch!

St Kieran’s begin their County championship campaign in Connolly Park next Saturday afternoon at 4 o clock .
They are in a Group consisting of Austin Stacks West Kerry & Dr Crokes .
Preparations have been going well in recent weeks , with 2 challenge Games & numerous Training sessions.
Ballymac will be represented by panellists Donal Daly, Diarmuid Galvin, Gary Lynch ,Luke Horgan, Luke O’Connell, Sean Rice, Aidan Horgan,Andy Rogers, Maurice O’ Connell, Niall Collins, James Kenny, Skye Lynch & Eoin Creedon .
We would like to wish the Best of luck to all Ballymac players , St Kierans Team & management the best of luck in the campaign.
We would welcome all support for the players next Saturday in Connolly park

The draw was made for the U15 Tralee & St Brendan’s Championship was mde recently. . The draw is listed below. The Date for these games is not yet known.

The year so far has been a huge success with both teams reaching their county league division finals although losing both, and our Gold team reaching the Central Region semi-final where they came up against 2 A teams and performed heroically just losing out by 5pts, and our Blue team reaching another final which hopefully they can get it over the line.

We travelled back west last Wednesday night where we started off brightly kicking some lovely points 3 from Ciarán o Connell and a super free from Michael Savage, the home side were just ahead at the first water break and their dynamic midfielder was causing us a lot of trouble with his dangerous runs and kicking off both legs, on the restart Jamie Burke made a strong run with the ball and he just lost control and as the ball hit the ground he unleashed a 25yard thunder bolt into the far corner to draw us 1 pt behind, a few minutes later and the home side scored a goal which was followed by another goal from us well taken by Maurice Harrington, we went in at HT 4pts down.

The 2nd half started and the home side kicked a couple of points but the lads never dropped the heads and kept going keeping us within touching distance, with the game into the last 10mins we got points from Luke Silies,Jamie Burke and another from Michael Savage to bring us within 2pts, when then had a goal chance which just got away and the home side pulled away in the final minutes.

Best for Ballymac on the night was all our defence who were never far from their markers and some great tackling specially by Stephen Turner, Tom Long and Conal Savage did a mountain of work as did our midfielders Michael and Luke, we have to mention the superb save from our keeper Luke Griffin which kept us in it and its his 1st year in goals, up front Maurice, Shane and Alex did very well and Michael, Jamie and Ciarán kick some lovely points.

All in all the lads can be very proud of the year they have had and played a total 11 games which is great for all the boys.

The draw was made for the U15 Tralee & St Brendan’s Championship. The draw is listed below. The Date for these games is not yet known.

Our U13 Boys Blue Game V Ardfert due to be played tonight  has been postponed and they travel to play Austin Stacks in Connolly Park on Friday evening next the 17th September at 6.30pm

There was heartbreak for our magnificent U16 Ladies, as they missed out by the narrowest of margins, 4-13 to 5-11. This was the game of the year, no other game in Ladies or Men’s will surpass it in terms of tension, skill, work rate and some outrageous scoring…this was a game of the ages.

Our Ladies started very strongly and raced into a very early lead with 1-3 to no score after 5 minutes, 2 pointed frees from Roisin Rahilly with a goal from Laura Sugrue and a Rachel Creedon point. Southern Gaels knocked over a point but we responded well with two points from play by Sarah Scanlon and Ciara Palmer. Our defence rock solid and led well by the Collins sisters (Anna and Kate) in the central roles, Anna at full back and Kate at centre back. However, we got caught for a goal after an unfortunate bounce off a knee; let Southern Gaels in for a goal. Respond our valiant did with a goal from Rachel Creedon and another point from a free by Roisin Rahilly.  This left the first half water break at 2-6 Ballymac 1-2 Southern Gaels, but we had left a few other goal chances slip by.

Southern Gaels started the second quarter very quickly, notching 1-2 in a four minute spree before Sarah Scanlon slotted over a point but on the next play we conceded a goal, despite the pressure our two corner backs Alice Brosnan and Laura Kelly were holding strong, with Ciara Kerins and Rachel Griffin were defending strong and launching attacks. Keelin Enright and Roisin Rahilly were putting in huge shifts in Midfield we managed to pull ahead again with a goal from Ciara Palmer. However, Southern Gaels finished the half with a goal and a point to tie up the scores at halftime.

With the incredible heat the ladies took on plenty of water during the break, listened to instructions and gave their feedback. They were ready for the second half. We started well with a lovely point from Sarah Scanlon, though then we shipped 1-3, with the three points from frees. Now we were in a hole, 5 points down 12 minutes into the second half, Ella Quirke gone off injured and we were starting to fade a little, but cometh the hour, what a response Sarah Scanlon goaled after a fantastic move started in our own box by an Anna Collins block picked up by Roisin and worked up the field. With Orla O’Connor was now on in place of Ella, this was quickly followed by a Jill Quirke point and then on the stroke of the second half water break came the score of the game…a point for the ages…Keelin Enright under pressure from 2 Southern Gaels defenders out on the right and 30 yards from goal put over a wonder point to tie up the game.

The final quarter and the game was in the melting pot, end to end stuff, real tension in the air, huge support for both sides, Southern Gaels drew first blood with two quick frees. Maire Culloty and Emma Daly came in, Ciara Palmer pulled one back, after a bad foul on Roisin Rahilly while cutting through the Southern Gaels defence. One point in it, narrowest of margins, Southern Gaels  score from another free…they win the kick out and are through on goal…this would end the game as a contest….Kerry Hennessy pulls off a diving save to her right and we stay in the game….we again move the ball at pace up the field, we cut the Southern Gaels  defence open, but they fill back and block up the goal area, we get a shot away but it was only a half chance and their keeper easily saves and clears. We turn it over and again move forward, Roisin Rahilly scores a point…we are only 1 down, time is almost up…Will the referee allow us to contest the kick out????….no the long whistle gets blown…game over…disappointment for our ladies…but they are some group of players and will continue their climb to the top. Special mention to our players who didn’t get on tonight, but we wouldn’t have got to the final without them. We move onto the North Kerry League Division 1 next Monday evening away to Kerins O’Rahillys. We will need all our squad again, as we build again #BallymacAbú

On Saturday morning 11/09/2021 Corca Dhuibhne took on Ballymac in Gallarus.  It was a lovely morning for a game of football; our referee was Johnny O’Shea.

Ballymac started off very well and went hard at the Corca Dhuibhne defence, which yielded results with Ballymac ahead at the first water break by 2 points.

In the second quarter Corca Dhuibhne were the team that was coming out strong and scored 2 goals and a point while keeping Ballymac scoreless.

In the third quarter, the game really opened up and both teams were holding nothing back, with scores coming thick and fast. For a neutral fan this was a great game with some lovely passages of play by both sides.

The match was set up for a frantic last quarter with Ballymac 3 points down. As in the last quarter there was no let up by either side and the scores continued to come with Corca Dhuibhne scoring 2-02 and Ballymac scoring 5 points.

There was no winner of the jackpot. Congratulations to the following lucky dip winners: Kitty O’Connell  €30.00  €20.00, Eileen Baily and the three winners of 3 for a €5 quick pick for next week’s draw were: Therese Williams, Linda Butler  and Ciaran Brosnan

We thank you all for your support and we really appreciate your continued support week in week out. Next week’s Jackpot is €10,800.00.

Tickets for the Ballymac GAA  lotto can be purchased by logging on to our web site:

Ballymac GAA is now selling our lotto tickets Via Mobile. All you need to do is give us your numbers, mobile number, and payment. We enter in via mobile phone and you get a receipt to your mobile. It’s totally transparent and accountable. Once again, we thank you sincerely for your continued support.