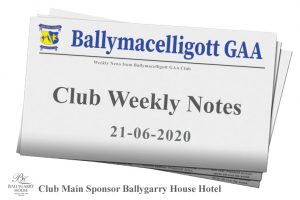 With just six minutes left in the game Ballymac had a blistering last few minute of the Tralee Board Championship semi-final. They played Austin Stacks in Caherslee on Saturday evening.

Our boys really put in a great effort throughout the game and just gave it their all in the last quarter. A goal and five points really narrowed the lead but the final whistle came too soon. It was a very brave and stylish performance for the Ballymac 15. The final score was Austin Stacks 3-16 Ballymacelligott 2-15 Best wishes to Stacks in the final.

Junior Team
There is one game left in this League and it is V Annascaul. We do not have a date for this game yet as Annascaul are still in the club championship.

Important Notice re Dogs on the Ballymac GAA pitches.
Once again we remind everyone that dogs are not permitted on our GAA Pitches or in the green play area immediately inside our gates. Of late dogs have been in the pitches and this ruins our play area for all our children and for Health and Safety reasons it is not permitted. We please ask all patrons to be mindful of this and to heed signs on our grounds that ask that dogs not be brought on the Ballymac GAA grounds. We thank you all in advance for your cooperation.

Croke Park has decided to formally proceed with plans to stage the All-Ireland senior, under-20 and minor inter-county football and hurling championships for 2020. The decision was made following positive interaction with the Government and an understanding that specific financial supports will be made available. Due to the reduced level of funding available as a result of the pandemic, a series of strict financial controls will be put in place by the Association which will govern the costs and preparation of teams. In addition to this a plan and series of protocols produced by the Association’s Covid Advisory Group and which will facilitate the safe staging of inter-county games will be circulated to counties.

Ballymac U10 Boys travelled to Spa in Killarney last Sunday evening. We had 2 teams who played excellent football on the night, with some fabulous passing and team work. We would like to thank Spa for hosting us. We have provisionally Dr Crokes at home next Sunday at 1pm . Ballymac Abú!

Ballymac U8 boys hosted Spa, Killarney today at Ballymac training field. What a great day for football. The weather was absolutely fantastic and the pitch was in great condition.

Many thanks to Spa, Killarney for travelling out.

We had 2 teams of seven-a-side and the boys enjoyed 2 games. The boys showed tremendous attitude for both the game and towards other players. Great work lads!!!

Tom O’Neill and Jack O’Connell are our two players of the week.

See you all next week. We have Go Games away in Dr Crokes, Killarney with times yet to be decided. We will keep you posted on Social Media & web site.

Our u 16s travelled to Kilcummin on Monday night and played the locals in Round 3 of the county league.

Despite playing against the wind our boys got off to a perfect start with two early points from Maurice O’Connell Kilcummin replied with 4 points on the trot to go into the lead.

However, a good spell for us with a Goal coming from Gary Lynch & points from James Kenny, Skye Lynch, Luke O’Connell & Andy Rogers put us ahead with 9 mins to the half time whistle.

However, Kilcummin dug deep and scored some long-range points and a hat trick of goals with the wind to lead 3 09 to 1 05 at the interval.

Our boys were unlucky with 2 goal chances in the first half.

We suffered a setback with injuries to Eoin Creedon & Maurice o O’Connell but however the boys tried hard in the second half-2 goals coming from James Kenny & further points from Luke O’Connell (2) & Andy Rogers.

However, Kilcummin were impressive in the second half and ran out comfortable winners in the end.

The lads can be very proud of their performances, they competed so well in Division 2 B and have progressed so well in the last number of weeks.

Despite injuries to key players we proved that we can match a lot of the top teams in the league.

Thanks to all parents who supported us on the night.

Important Notice re Academy
All Covid-19 protocols are strictly adhered to and the kids train in pods of 15.

All parents please adhere to social distancing while in and around the club grounds.

Please remember to fill in the health questionnaire on line.

The Junior C county final was played on Sunday 13th of September. A bitterly disappointing defeat in a excellent pitch in Castleisland Desmonds, played with a tough breeze blowing. We opted to play with the breeze in the first half. We did get some good ball in but with such a breeze we found it different to get hands on the ball. We did get a few scores up from Eve Creedon and Cora Savage. After the first water break we took the time to settle down and play our style of football which worked very well. A great point from our captain Una Kerins saw us go into half time up one point 0:7 to 0:6.

We were flying going into the second half, with momentum on our side, but we just couldn’t break down their defensive zone. We tried everything but could only manage a goal in the second half and allowing 8 points from Annascaul/Castlegregory. To our credit we didn’t give up!! We kept trying and trying.

To lose the game was hard but the learning from it will stand to us. We have a young team and there is no doubt these girls will use this defeat to their better themselves.

On the day we didn’t get to use as many subs as normal but the panel have been key to getting us to the final.

We wish a speedy recovery to Alyssa Leen on her injured knee, sustained during the game.

Huge thanks goes to Sean Hennessy and Fionnan Fitzgerald for providing fantastic commentary throughout our County Championship run and to Kerry Hennessy for the scoreboard.

Also, a massive thank you to Sports Direct for sponsoring a team set of O’Neill’s half zips for the final.

What’s next? We have North Kerry League coming at us fast with a game against Abbeydorney next week. Giving us a chance to regroup and move forward.

The under 10 girls enjoyed a lovely game in a sun-drenched Mitchells complex on Sunday morning 20th September. Displaying all the basic skills of the game, the girls can be really pleased with their performance. Practice makes perfect and the girls again showed their coaches and parents the huge improvement made by all of them in the last six or seven weeks. Well done everyone.

The lucky dip winner is once again Declan O’Connell!

Thanks Declan or your support.

We thank everyone who supported Ballymac GAA Play Ball Lotto this week .

All the money raised goes towards the club upkeep.

Next weeks Jackpot is €840.00 and the draw will take place on Monday 21st September after  9pm

You can buy your ticket for next weeks draw by logging on to our web site.

We thank everyone for their support of this interim lotto.