Ballymac played their first game of the 2021 Junior Championship on Sunday in Cordal. Thanks to the Cordal Club for an excellent presentation of their pitch  for the game.  Their opponents for this game were Listry.  This was not the first meeting of these two teams this year.  They met in the county league and Ballymac were the winners on that occasion.

Listry were determined to reverse the result on the second asking.

The game was 8 minutes old before we had the opening score.  This came from Listry’s star forward Ronan Buckley.  Shortly after their centre forward buried the ball in the back of Ballymac’s goals.  Vinny Horan opened the scoring for Ballymac with a point from a free.   A couple of minutes later he pointed from play.  Three more points from Listry left the score at the first water break at Listry. 1.4 to Ballymac 0.2..  When play resumed Listry scored twice to leave their half time score at 1.6. Ballymac tagged on 1 point to leave their score at 0.3

Ballymac started the brighter in the second half and quickly registered 2 points from play.  Listry fought back and cancelled out these points with a point from play and one from a free,  Two more scores from Listry to Ballymac’s one left the score at the water break,  Listry 1.10 to Ballymac 0.6.

Listry continued to pile on the pressure and scored 2 more points from play, Ballymac registered 1 more point from play to leave the full-time score at Listry 1.12 to Ballymacelligott 0.7.

Ballymac will play round 2 in two weeks when they play the winners of Gneeveguilla V Finuge. Its still all to play for as two teams qualify from the group.

A big thanks to our Runaí Fionnán Fitzgerald for organising, collecting and distributing the tickets for the game and all games up to this. Hopefully new Covid regulations will ease this burden for future games.

The Group Stage shall be on a League basis of four Groups of four teams, with each team in a Group playing the other teams once.

A Draw will decide who meets in the Qtr Finals. Group Winners @ home to Group Runners-Up (from another Group). S-Finals = Open Draw.

In the event of teams finishing on equal points after the  Group stage, the tie shall be decided by the following means and in the order specified:

Where two Teams only are involved – the outcome of the meeting of the two Teams in the Group.

Note: Where a Club fails to provide its pitch for a neutral game, it automatically loses home venue.

Seeded Teams: namely:  2020 IFC Relegation Play-off losers, 2020 JPFC Runners-up, Fossa & Brosna plus an ‘open draw’ amongst the remaining teams to decide the make-up of each Group.

Extra Time to apply in the Qtr. Finals/S/Finals & Final unless otherwise decided by the CCC. Result on the Day may also be used if deemed necessary by the CCC.

Only draw for Rd 1 will take place and fixtures for Rd 2 & Rd 3 will be determined by the results of Rd 1 game – ie Rd 1 winners avoid each other in Rd 2.

For the purposes of confirming the Rd 2 & Rd 3 Matches where a game finishes level in Rd 1 – The 1st named team in that game will be designated the ‘Match Winner’ & the 2nd named team the ‘Match Loser’.

Where a team cannot field due to ‘Covid Related Issues’ the CCC may decide to (i) award game to opposition or (ii) declare fixture null and void or (iii) replay fixture at a time and venue to be decided by the CCC.

Our U17 team have completed their training and competitive games for the season. Eight of the present squad will progress to Senior Level next year. We thank all the players for their commitment and time given to the club over the past tweleve months. It was not an easy twelve months for anyone. We thank the Coaches: John Rice, Charis Flannery and Eddie O’Connell for their mentoring and coaching. In addition, we had Covid documentation and administration to deal with and both the coaches and parents were superb in just getting on with it. A special thanks to Liasion/PRO Eddie O’Connell who did unmeasurable work all year in keeping everyone updated. Míle Buíochas to you all.

We would like to wish all our members who received their Leaving Cert results the very best of luck. You are all A+ in our eyes. It has been a tough 20 months for all students with disruption to study and Covid Regulations and mask wearing. You all had to change your lifestyle and study. We admire you all for coping with all the challenges so well. We wish every one of you all the best for the future.

Our Two U15 s teams were in action in the Central Region competition this past week.

On Monday last the 30th August The Gold team travelled to Connolly Park to play Austin Stacks. The final score was Austin Stacks 4-14 to Ballymac Gold 4-04.

Ballymac U9s togged out this morning for a Go Game at home against Listry. We fielded two teams each playing 30 minute games.

The boys displayed some great tackles and there were plenty of scores from both sides.

Jake Sugrue, Mickey Brosan and Michael Scanlon did some super defending. Daithi O’Connor, Tadhg Brick and Dara Leen in mid-field ran all day and showed great spirit. Jack O’Connell and Conor Mangan scored some fine scores for our side. It definitely wasn’t a one-sided game and Gearóid Jones and Daniel Maher made some fantastic saves against a strong Listry team. Sean Ireland is improving nicely in his first year playing for U9s Ballymac and made some great blocks.

It was great to have Scott Fitzmaurice back in action after an injury all summer and he made himself known.

Well done to all the boys who turned up today and played. Thanks to parents and coaches.

We are looking forward to our next game yet to be confirmed. Ballymac Abú. 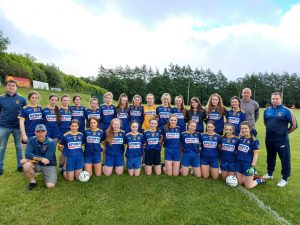 The Ballymacelligott Ladies U16 team that play In the County League Div 1 final  v Southern Gaels on Tuesday 7th September  in Glenbeigh @ 6.15pm

On Saturday evening,  in the first round of the Division 2 Inder 14’s Ladies football, Ballymac were at home to Na Gaeil.

It was a lovely evening for a game of football and this would be our first game this year where the lights had to be turned on.

Frank McLaughlin was our referee for the game.

The game started off at a quick pace with some very tight marking by both teams.

After the 1st water break the game started to open up, Ballymac scored  2 goals and 1 point and Na Gaeil scored 3 goals and 4 points in this quarter.

Ballymac were unlucky here as 2 of the goals came in high and just went in under the bar.

Score at half time,

At this stage Na Gaeil were moving the ball that bit faster then Ballymac and their hard work was paying off.

In the 3rd quarter,  Ballymac came out strong and scored a goal and a point to Na Gaeil 3 points.

Score at the end of the 3rd quarter.

In the last quarter the defence from both teams were under pressure but managed to hold their ground with only 1 point being scored by either side.

Last Monday nights Play Ball Lotto Jackpot was €10,600 and the draw was made by Jer Lynch and Kevin Leen. The draw was live on Facebook. The numbers drawn were 3,10,20 and 21.

There was no winner of the jackpot. Congratulations to the following lucky dip winners: €30.00 Bruce Hannah €20.00, Siobhan Leen. and the three winners of 3 for a €5 quick pick for next week’s draw were: Julie Quirke, Cliona Lynch, and Neil Breen

We thank you all for your support and we really appreciate your continued support week in week out. Next week’s Jackpot is €10,700.00.

Tickets for the lotto can be purchased by logging on to our web site:

Ballymac GAA is now selling our lotto tickets Via Mobile. All you need to do is give us your numbers, mobile number, and payment. We enter in via mobile phone and you get a receipt to your mobile. It’s totally transparent and accountable. Once again, we thank you sincerely for your continued support.