Photo Caption: The Ballymacelligott GAA Rounders team founded in 2021 and came runners up in a Munster Blitz on Sunday last. 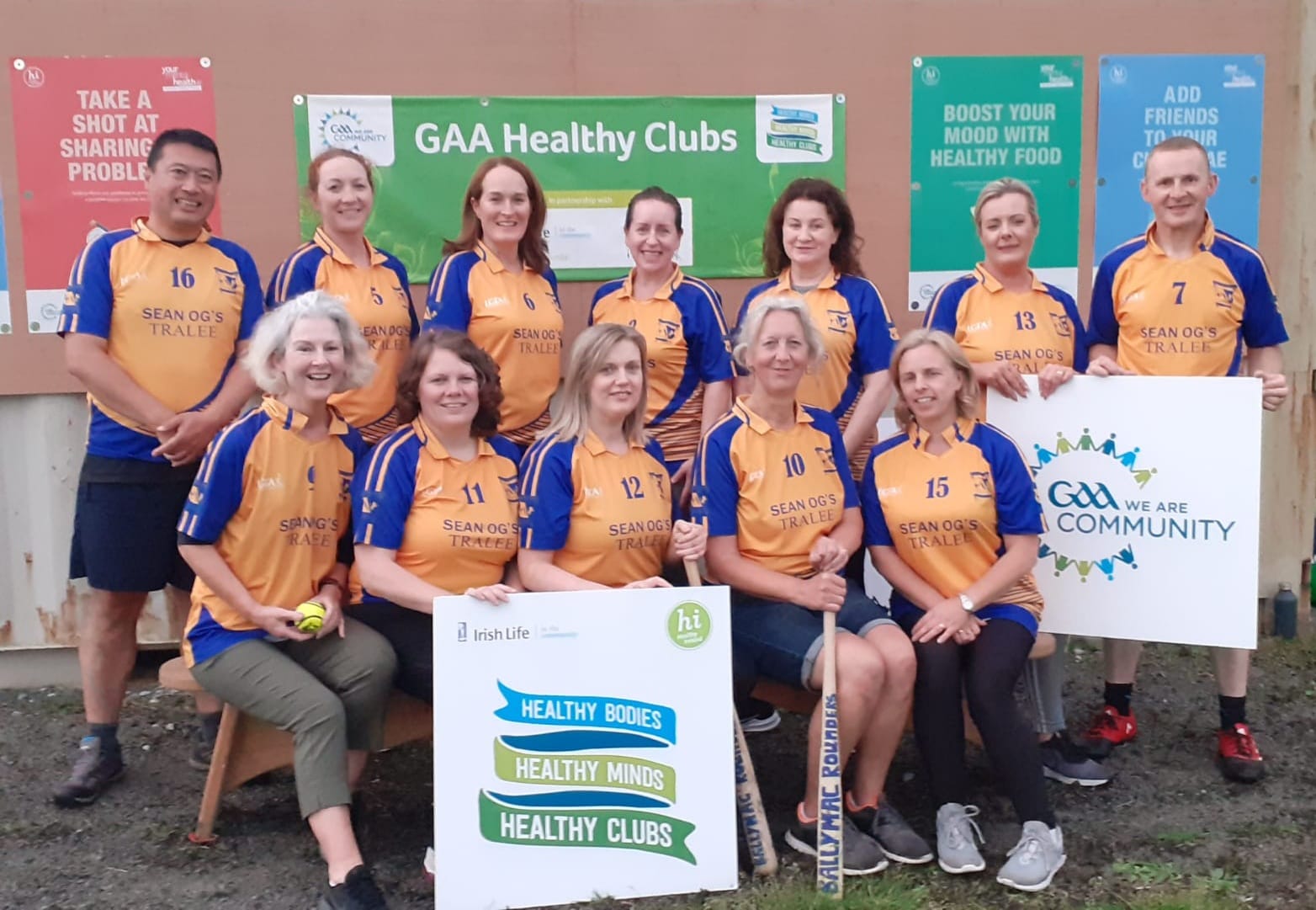 Our Senior team Ballymac were 1-07 up in the opening minutes of the second half when Finuge notched up their first score in our last game of the Junior Premier Club Championship The final score was: Finuge 1-03 Ballymacelligott 1-04.

The senior team and management next outing will be in the Tralee Championship which could a few weeks off.

We had a great year following the team and it was marvellous to be back supporting the team on the pitches around the County. There is nothing better.

We wish to thank all our supporters who travelled to the home and away games all year.

It is marvellous to hear your own supporters encouraging your team on from the sideline! Our Senior Panel has shown dignity and courage in the face of adversity over the past two years and being promoted to Division 1 was superb and gave everyone in the club a much needed boost. Ballymac Abú!

Well done to our Minor Team and Management on overcoming West Kerry on Saturday last in The Keane’s SuperValu Championship at Castleisland Desmonds Pitch.

Check dates and fixtures on web site and social media later in the week.

Dedication and resilience came to the fore on Sunday when our Ballymac Rounders Team took part in the Munster Blitz in Mallow. They came home runners up having learnt so much!! They also came home fairly wet !

Ballymac GAA is only club in Kerry with a Rounders team so not only were they representing our club…but also our County. Our team has trained every Thursday night in this newly formed initiative. We have players who like to come along and enjoy a social game but this group enjoys the challenge of competition!!

Have you booked your place at one of the fabulous 60 plus events on offer to you for FREE during Kerry Mental Health and Wellbeing Fest, 9th -16th October? To find out more about #KerryMHWFest and to book your place at one of the many super events simply click on https://volunteerkerry.ie/kerry-mental-health-and…/ #selfcare #yourworthit #mentalwellness #kerry #ExperienceKerry

Our U6 academy session this week focussed on honing our important team playing skills of passing accurately while moving with the ball.

As always, the kids were well up for the challenge, even in the pouring rain. We finished up our session this week with our biggest game of football yet and all the coaches remarked afterwards how well all the players did. We had some lovely goals and points scored but what was most impressive was the teamwork displayed by all. The future of Ballymac is bright!

Well done to our U7s who had a match V  Firies in Farranfore on Sunday as well.

Keep up the practicing everyone!

Our academy will finish on Sunday 17th October and we will return again in early March.  We will have more information on our last day closer to the time.

On Sunday Our u13 Boys travelled west to take on Annascaul/Lispole in the first round of Division 2 of the Central Region.

Two early goals saw us take control of the game and the home sides cause wasn’t helped when one of their better players had to leave the field with an injury.

We outscored the opposition 0-2 to 0-0 in the third quarter.

The last quarter saw Annascaul/Lispole put in a huge effort to rescue the game and when they scored a goal with ten minutes remaining it gave them a great boost.

However full credit to our Boys who worked the ball up the field to raise a green flag of their own.

The home side continued to battle for scores to get back into the game but some resolute defending ensured we were victorious on a 3-8 to 1-8 scoreline.

Our Gold teams game V Ardfert did not go ahead.

Our U15 Team are in the Castleisland District Final following their 6-10 to 5-11 win over Currow in the semi final last Wednesday night. They play Scart/Cordal in the final. Date TBC. Watch our Social media Pages for updates.

On Wednesday 22nd Sept the U12 North Kerry League Division 4 Shield final was played in Ballymacelligott.

Opposition on the night came in the form of Duagh who finished in third place in the league behind Ballymacelligott.

The game was played in glorious sunshine and refereed by John Ross.

Our Reliable goalkeeper Grace and popular Mentor Fintan Kelly were both absent due to the sad passing of the Late Donal Kelliher Castleisland.

(Grandfather of Grace and Father in law of Fintan)  May Donal Rest in Peace.

A minute’s silence was observed at the beginning of the game as a mark of respect to Donal’s memory.

Also absent due to injury was Cait Griffin Kirby and we wish her a speedy recovery.

With the experience of having found Duagh difficult to break down from our previous encounter “Take your points” was the instruction from the sideline to the players.

Michelle O’Connor opened the scoring with a point from play followed by a long rage free off the boot of Molly O’Connor,

Two further points from play again from Michelle O’Connor before Emily Heffernan opened her account with a well worked point,

Molly O’Connor obliged with another free before Olivia Sweeney finished out the quarter with a well taken point from play.

This trend continued into the second quarter with four further points from play for Ballymac to a solitary Duagh goal.

and two further points from Emily Heffernan who was proving a real menace to the Duagh rearguard as were fellow players Tara Slatery and Aideen Healy.

Making her debut in goals was Kate O’Neill who stepped in for missing Grace Kelly.

Kate did not disappoint; her kickouts alone gave Ballymac a great platform to launch attacks and she made some great saves along the way.

The Ballymac Defence was very alert throughout only allowing Duagh in for one goal in the opening Half.

At half time the shape of the Ballymac team was completely changed to allow players try new positions and give the bench a run.

The third quarter was a much closer affair with Duagh Scoring 1.01 but Ballymac edged it with 1-02.

Molly found a wat to finally breach the Duagh rearguard with a rocket of a goal.

The post had denied three earlier efforts from three different players and the duagh Goalie made some terrific catches and saves..

Into the final quarter the original shape of the team was restored to help see the game out.

Katie Turner put in a great shift all night and although she was unlucky with a couple of scoring efforts she did a wonderful job marking one of Duagh’s best players in midfield.

Ballymac added to their score with three points, Two from the boot of Michelle o Connor and one from Aideen Healy,

Duagh scored two points in this quarter and to their credit never gave up regardless of the score.

The Trophy was presented by Ballymac’s Own Linda Daly who is always to the fore in promoting Ladies football,

Joint Captains on the night Molly & Michelle O’Connor gave a great speech ending with three cheers to their opponents.

This concludes the Ballymac U12 Ladies Season for 2021.

and wish them all of the best going forward in football with Ballymac Gaa.

Thanks to the parents and supporters who came out to cheer us on in 2021 in all kinds of weather.

We extend our deepest sympathies to Bob, Ted, Mary, Sinead, Catriona, Deirdre, and Ciara on the death of their mother Kathleen Walsh, Kielduff Tralee. Bob is a former player and senior selector with our club. Kathleen’s grandson Tommy is a member of our U13 team.

It was with sadness that we heard of the death of Donal Kelliher, Castleisland. We extend our deepest sympathies to Kate, Fintan, Adam, Laura and Grace Kelly, and all the Kelliher family.

Donal’s Grandchildren Adam, Laura, and Grace Kelly all play with Ballymac teams, and his son-in-law Fintan is involved in coaching in the Club.

May Donal rest in peace.

Paddy Prendergast the former Mayo All Ireland winning player 1950 and 1951, passed away this week. Paddy had a lot of friends in Ballymacelligott GAA and visited them regularly over the years. We extend our deepest sympathy to Paddy’s family and friends. May He Rest in peace.

Huge Congratulations to Jack Collins of Tonreigh who brought glory to Ballymac on Saturday last when he ran a magnificent race to secure a Gold medal in the u12 600m Final of the National Community Games held in Carlow.

Jack took on the cream of athletic talent from the rest of the country and came out on top.

He brings a huge honour to his family and locality.

We are hugely proud of this National Champion in our midst.