Our senior team are out next weekend away against An Ghaeltacht in Round 4 of County League. Keep a close eye on social media during the week for final fixture details

Easter Saturday’s home game for the Ballymacelligott Development side was lost in the second half when our side conceded too many frees that Listowel took full advantage of.

The game started well for Ballymac when Barry Lyons set up a goal for Michael Herlihy and then was fouled which resulted in a goal from the penalty taken by Dara Broderick. Listowel took their points and but for good goalkeeping would have scored a goal in the first quarter.

In the second half, the Listowel forwards tormented the Ballymac defence. A goal in the first quarter gave them the momentum to keep driving forward. Ballymac scored six points in the half. Listowel added nine points to their goal and this ensured they went home victorious.

On the bright side, it was great to see so many young players togged out for Ballymac. It’s a novel competition and great to have games for all these players who love playing football.  They keep improving and enjoying their football which is a winner for the squad.

Wednesday evening our boys entertained Dr Crokes in round 3 of the league. Needing to win to keep in the hunt for a Division 1 semi-final spot our boys dug out the victory after a slow start. Down at halftime by two points we ran out winners on a score line of 2-11 to 2-06. Well done boys. Next round away to Laune Rangers next Wednesday.

Last Wednesday night our Gold team got off the mark with a fine win against a very good young Dr Crokes team, we started slow and went in at HT down by 1pt, but our lads came out strong in the 2nd half and kicked some lovely scores, the game was nip and tuck for most of the 2nd half until we pulled away in the final 10mins, we had fine performances from Shane Brosnan, Jackson Brosnan and John Leen in goals.

This coming Friday we are home in round 3 to Laune Rangers at 6.15pm.

Our u10 team displayed some fine football skills against Milltown/Castlemaine.

Although we were missing a few players and again called on U9 players to step up, Ballymac took the lead from the onset. Mikey Brosnan and Conor Mangan (U9s) were scoring goals a plenty in the first half. Conor Mc Carthy gave it everything. We could have had one more only Mikey’s shot hit the cross bar. Tadhg Brick and Dara Leen ran from pillar to post and assisted many scores.

In the second half Milltown/Castlemaine upped their game but Daniel Maher pulled off some great saves.

Conor Browne, Tom O’Neill, Jake Sugrue and Michael Scanlon were solid in the backline for Ballymac.

Well done Ballymac boys and thanks to coaches and supporters. Many thanks to Milltown/Castlemaine also.

Happy Easter to all our Ballymac Academy superstars. Our U5’s were delighted to be joined by the U7’s for this week’s session. Our seasoned players did an excellent job of showing the younger players how to perform the difficult hand pass and loved having the opportunity to show off their goal scoring skills. Thanks to the parents, coaches, support staff and kids who braved today’s weather. We’ve all earned our Easter Eggs today! 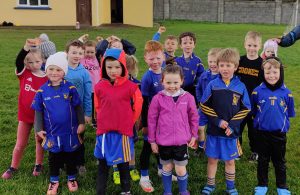 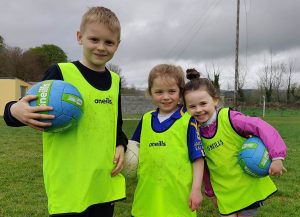 Ballymac 1-09
Listowel 2-05
The Senior ladies played the Donal Curtain Cup Round 2 game in Ballymac on Thursday evening. As expected, a very tight tough game resulted with both teams giving everything they had. We started well going into a 2pts lead through scorer in chief Roisin Rahilly. Listowel fought back and tied up the game with 2pts of their own. It was tit for tat with very good defending on both sides. A goal from Roisin made the half time score:
Ballymac 1-03 Listowel 0-04.
A similar second half followed. Listowel scored an early goal to lead 2-04 to 1-04. Our girls really dug in and chipped away with points to level the game. Sub Michela Murphy was the hero of the hour with the winning point late on. It was great to win such a tight game and it will really stand to the team going forward.
Team: Robyn White, Naomi O Sullivan, Roisin Long, Grainne Galvin, Ciara Kerins, Una Kerins (C), Millie Luck, Aisling O Connell, Emily O Brien, Ellie McElligott, Roisin Rahilly (1-07), Keelin Enright (0-01), Caoimhe Carroll, Kate O Connor, Deirdre Millane.
Subs: Shona Griffin, Michela Murphy (0-01), Veronica Heaslip, Niamh Rahilly

Unfortunately we lost what can only be described as magnificent display of ladies’ football. Played in beautiful warm conditions in Na Gaeil under the watchful eye of a large crowd. We had 18 girls togged out each and every girl got loads of game time and all players contributed to a great game. We got some wonderful goals and points from all angles.
Grace Kelly in goals set us up with wonderful kick outs to mid field pairing of Fiona McCarthy and Meabh O Connell driving great ball into forwards Aedin Healy and Amy Roche. Captain on the night was Alice Savage.

Congratulations to our three lucky dip winners this week:

Tickets can be purchased by logging on to our website: www.ballymacgaa.com  or via our mobile app and our sellers are Paula Silles, Gene O’Keeffe, and The Half Way Shop. The closing time for entries from the shop will be 4 pm on Mondays to facilitate the draw.

We thank you all for your support.