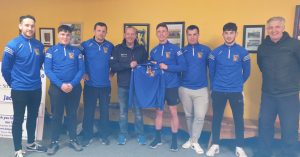 Our Senior Men’s Team were delighted to receive new half zip tops, shorts and socks on Friday evening, which were sponsored with the help of Geoff Riordan. This is a great recognition of the hard work they are all putting in on the pitch.

On Saturday, in dry and windy conditions our Senior Men’s team faced An Gaeltacht in Rd. 4 of the Div. 1 County league in Gallaras.

In a tight first 30 minutes, Ballymac and An Gaeltacht engaged in a tight battle and at half time Ballymac lead 0-8 to 1-3.

Facing into a stiff breeze in the second half, Ballymac struck early with a goal from Aidan Breen. Ballymac, away from home, look composed and fitness proved to be sustained throughout the 60 plus minutes of play.

It was Ballymac who made the best of the conditions in both the first and second half and deserved the victory on a score line of 1:16 to 1:09.

After the match An Ghaeltacht provided us with some fabulous hospitality which was very much appreciated.

Up next is St. Marys at home next weekend, keep an eye on social media for further details

Under 15 County League Division 1B Round 4.

An away trip to Laune Rangers on Wednesday last was the challenge for our boys and they duly delivered. After being down a point at halftime they went onto win by ten after an excellent team performance in the second half. Two goals at crucial times put daylight between the teams but also limiting Laune Rangers to a single score in the second half had a huge bearing on the result. Well done boys. Next round is at home to Beaufort on Wednesday next at 7pm.

Under 15 County League Division 9B Round 4.
On a lovely Friday evening for football in Ballymac we welcomed Laune Rangers for our Gold team’s 3rd outing in Div 9B.

Both teams started brightly and after 10mins it was 2pts a piece, with Sean Martin kicking some fine frees for the home side.

After a blistering spell by the visitors, we went in at HT trailing and an uphill battle was to be fought in the 2nd half.

To be fair our lads did not give up and Luke Griffin was moved to midfield and made a good impression.

In the end Laune Rangers ran out comfortable winners and should go a long way to winning the Div 9 title, our lads will learn from this game and we still have a semi-final place to fight for this coming week.

The u15 mentors would like to thank Daire Keane our senior player who stepped in at the last-minute last week when the ref failed to turn up and reffed a fine game against Dr Crokes B, thanks Daire.

Fixtures for the coming week

Gold team played John Mitchel’s on Thursday last on our main pitch. We had only 9 players on the field but each and every one played their heart out. Tadhg Brick and Jake Sugrue were simply brilliant. We lost count of the scores from Daithi, Tom, Tadhg and Dara. Regan did a super job as goalie and his kickouts were outstanding finding a team mate each time. Dylan, Conor and Micheál worked hard throughout.

It was a beautiful evening and all the boys enjoyed their football and wore their new jerseys with pride. Well done to all the boys. Ballymac Abú. 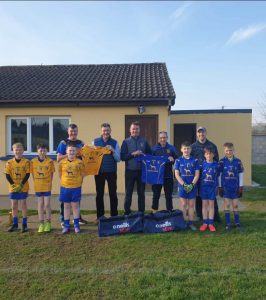 A big Thank You to Liam Dowling and all at Ballymac Kennels for sponsoring new jerseys for our under 11 Blue and Gold teams. Liam presented them to the team management John Leen, Kieran Boyle and Club Coiste na nÓg Chairperson Kieran Savage this evening. Many thanks again to everyone involved as it’s really much appreciated. We hope numerous young boys wear them with pride for years to come. Ballymac Abú.

Our u 9 s & u 8 s travelled to Na Gaeil on Thursday evening to play the locals in a Go Game Blitz.
In glorious sunshine, we mixed both teams and played 7 a side. There was some lovely passages of Play as the boys went about improving on their footballing skills while also having fun on the night .
Na Gaeil then came to Ballymac on Sunday Morning where we had two teams u 8s & u 9s playing against each other .
All players acquitted themselves well and Continue to improve with their skills with each passing week.
Thanks to Na Gaeil for accommodating us on both occasions .
Thanks to all parents who supported us on both days .
Thanks to Diarmuid Galvin and Eoin Creedon  for refereeing on the Sunday and for doing an excellent job .
We train again next Sunday morning, we look forward to seeing all the Boys then .

Another wonderful U5’s session was had this week. Nearly 30 players joined us to practice their kicking, hand-passing and agility skills. It’s great to see the progression week on week, with the youngest players starting to gain confidence in their new skills and our more experienced players helping them along the way. 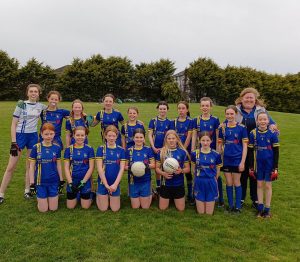 We came away with a heavy loss in this game. we are perhaps in a division too high yet.

but we are working hard at training and we couldn’t be more proud of how the girls are progressing. from the start we were under pressure but Grace Kelly in goals was just outstanding unbelievable saves and matched with wonderful kickouts. Fiona McCarthy in midfield was endless in her running and looking for the ball. captain on the night was Oliva Sweeney who has been flying also in the defence accompanied on a tough night with pressure on the whole time by the great Hannah o Rahilly and Rachel Pendergrass. All 16 girls on the night never once gave up even when the game was gone, they kept trying. A great Ballymac spirt.

We have Churchill next at home.

Ballymac Health and Wellbeing in association with LGFA are starting ‘Mother’s and Others’ this Tuesday 26th April at 6.15pm at Main pitch. This initiative is aimed at anyone in our community who wants to get out and meet new people! No prior experience or knowledge of GAA is needed…. just bring along a positive attitude and an appetite for getting fit while having fun!! Everyone welcome!

This week’s Lotto numbers are 5,7,10,11. The numbers were drawn by our U14 Ladies, Molly O’Connor, Sorcha Healy, Fiona McCarthy and Katie Turner with Paudi O’Connor on the camera.

Congratulations to our three lucky dip winners this week:

Next week’s Jackpot is €13,800.00 and the draw will take place on Facebook Live on Monday 25th April after 6pm

Tickets can be purchased by clicking here. https://play.clubforce.com/play_newa.asp?ll_id=2258&PC=0&RP=#Anchor

or via our mobile app and our sellers are Paula Silles, Gene O’Keeffe, and The Half Way Shop. The closing time for entries from the shop will be 4 pm on Mondays to facilitate the draw.

We thank you all for your support.