Rúin/Motion
1. That Tom Herlihy & Tony Riordan be appointed Vice President of Ballymac GAA Club.
2. The membership cost of Ballymac GAA Club be as follows from the 2/12/2020
(1) €75.00 per adult member.
(2) €50.00 per juvenile with the exception of girls over 12.
(3) €25.00 Plus LGFA Levy for all girls and ladies who play LF over 12 years of age
(4) €50.00 for OAP and students.
(5) €10.00 per Adult for Adult Scór participants
(6) €5.00 per juvenile for Juvenile Scór participants
3. That the membership for all current senior Adult male players and working members form previous working year be €50.00 per person.
4. That a minimum of 1/4 of the nett income raised by way of Club Fundraisers be deposited in the Club Development account towards future Development in the club.
5. That the Annual Lotto ticket be €80.00 per year from 1/4/2020.
6. That the lotto numbers on the lotto ticket for weekly draw increase from 28 to 32 from 1/4/2020.
7. That the executive of Ballymac GAA Club examine the feasibility of depositing Ballymac GAA Development money in the Croke Park savings account for clubs so that any future loans by the club would be interest free.

Referee Foundation Course
A referee foundation course is organised for Friday 29th November 2019 and Friday 6th December 2019 in the Kerry Centre of Excellence, Currans Village, V93 A4N6 at 7.30pm for both dates.
The 3rd date for this course will be early in January 2020. Date and time to be confirmed.
All nominations for the referees foundation course will need to be submitted through Club Secretary at secretary.ballymacelligott.kerry@gaa.ie

Ballymac GAA Lotto Results from Monday 19th November.
This weeks lotto draw took place in Ballygarry House Hotel
The Jackpot was €5,500.00. There was no winner.
The Numbers drawn were: 2,6,10 & 18.
Congratulations to the following Lucky Dip winners (€30 EACH)
1. Jim Brown C/O Tom Leane
2. ON LINE WINNER: Mairead Reidy Kielduff
3. Joseph Leen, Kilquane.
4. Aimee Silles C/O Paula Silles
5. Podge Leane C/O Tony Marshall
Sellers prize: Tom Leen (€30).
Next Weeks Jackpot is €5,600.00 and the draw will take place in The Half Way Bar Centre on Monday 25th November 2019.
Tickets can also be purchased on line on our web site and you could win the €5,500.00 jackpot!
Tickets for our Lotto are also for sale at The Half Way Shop & Bar, O’Riadas Bar, Boyles Hardware Clash and Horan’s Fruit and Veg, The Horan Centre Tralee.
We thank all our lotto sellers and supporters.
All your support is greatly appreciated. 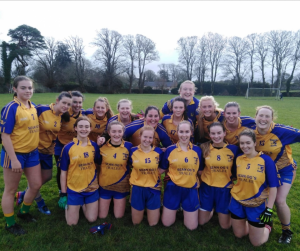 It was a fantastic end to the season for the Senior Ladies on a cold November Sunday morning as they picked up their first piece of silverware. The ladies welcomed Abbeydorney in NK Division 1 Plate Final. An outstanding display of ladies football and fabulous team spirit from the first whistle to the final whistle. A great achievement for this team, who only began 3 years ago. May it be the first of many!! Úna Kerins, Captain, accepted the cup on behalf of the team.
The team wishes to thank the management, James Godley and Patrick White, for their continued efforts, support, guidance and encouragement throughout the season. Thanks are also extended to the loyal supporters who have travelled the County in all sorts of weather to cheer them on.

Well done to our U 16 Ladies on winning the North Kerry League Division 1 Shield final in Austin Stacks, Connolly Park Pitch under lights on Monday evening. Emily O Brien, captain, accepted the shield on behalf of the team. A great end to the season!!!