Ballymac Senior Team:
The next game in The Senior Football League is on Sunday next the 9th June when we welcome John Mitchel’s to Ballymac. The game is at 2.00pm in Ballymac.

Ballymac B team on Saturday
Our Junior League game V Cromane last Friday night was called
off due to a bereavement in Cromane. It is now scheduled to take place on Sunday 23rd June at 2pm in Ballymac.

U15
Our U15 players will took part in the Munster U 15 Super 10’s Competition last Saturday 1st June. Our boys played well and won one game and lost two. It was a great and very enjoyable expereince for the boys to play teams they would not normally play against.

U14
The County League U14 Division 9B Final is on Friday 7th June against Miltown/Castlemaine venue to be decided. We wish the team and management every success. Up dates on the venue will be posted on our web site and facebook page.

U12
Blue team
Ballymac Blue 2 10 Austin Stacks A 3 07. A last minute point from Stacks tied up this affair which overall was probably the fairest result.
Ballymac started the brightest and dominated early possession but truthfully didn’t convert this onto the scoreboard, it was Stacks who proved more clinical in front of goals and led at half time 2 06 to 0 05.
Ballymac raised their performance in the second half and found their shooting boots, outscoring the opposition 2 05 to 1 01.
To a man this was a fantastic performance and great turn around in the second half, Matthew Rogers was inspirational to all around him in his new corner back role, Captain fantastic Sam Slattery led the charge from half back and was an immediate threat when switched to the forwards late on.
Conal Savage proved to be a match in midfield against Stacks finest. Excellent team performance next up is an away game to Laune Rangers this Tuesday 4th at 6.45.

Gold Team
Gold Team 4-12 Austin Stacks 3-2
Ballymac Gold Team played Stacks at home on Sunday June 2nd in their second game of Phase 2.
The boys played some lovely fast moving football in the first half .Ballymac were well ahead at half time leading 3-7 to 1-1.
In the second half our boys continued to play well ,moving the ball quickly with some excellent passing.
John Leen had a great game in goals. Our defence was solid and our forwards were in flying form: Our scores coming from Michael Quirke, Eoghan Joy, Gearoid Healy, Paddy Lucid and Sean Martin.
A great team performance as always by these boys.
On Tue 4th June our two teams travel to Killorglin to play V Laune Rangers at 6.45pm.

Best Wishes to Students sitting exams:
We send all our best wishes to all our young players who will sit the Junior and Leaving Cert exams over the next few weeks.

U10 Boys
Ballymac U10 Boys had a good turn out on Sunday morning those to impress were Gearoid Joy, Eric Quirke, Harvey Leen, Jack Lynch and Patrick Leen.

U8 Boys:
A very enjoyable Sunday morning U8 training session which ended with a friendly game. Well done to Evan Horgan who is our star player this week. Our Ballymac boys gave a warm welcome to Ryan O’Donovan who was visiting from Meath.

Under 6:
We had 32 enthusiastic under 6s at training on Sunday morning last. Under the close watchful eyes of their coaches they practiced kicking, rolling the ball, catching the ball, passing the ball and learned how to play as a team. Emphasis was on bringing their fellow players into the game by passing the ball. The session ended with two fun filled games where all the new skills were put into practice. Our Coaching Officer Stephen O’Brien was very impressed by the skill improvements made by the U6 players over the past few weeks and praised them all. To all U6s remember to do the home work given by Frank and we will see you all next Sunday

Next Weeks Jackpot is €3,100 and The Venue is Ballygarry House Hotel
We thank all our lotto sellers and supporters. All your support is greatly appreciated.
Support our lotto by clicking here now and you could win the €3,100.00 jackpot.

Sympathy
We extend our sympathies to Noreen Power and all the Power family and to the Austin Stacks Club on the death of Jackie Power. May he RIP.

U14 Girls:
Congratulations to Ballymac’s Roisin Rahilly and her Kerry U14 team mates on their success last weekend in the All-Ireland A blitz in Clonberne Galway. The girls won all 3 games.
Ballymacelligott 3-5 Southern Gaels 6-11
Division 1 County League

Last Sunday we hosted Southern Gaels in Ballymac for the first time in the Ladies Club History. Though this was always going to be a tough challenge, we were looking forward to testing ourselves against the best team in Kerry.

The final score of 6-11 to 3-5 wasn’t flattering; it didn’t reflect the efforts of the Ballymac girls.

Ultimately the class of the 4 Kerry U14s in the Southern Gaels team told but our girls can be very proud of their display on the day.

On Sunday the 26th May, a young Ballymac team played host to a much stronger Southern Gaels team.

Sarah West in goals made numerous saves and her strong kick outs always gave us a chance to launch a few attacks of our own.

With Maire Culloty, Niamh Rice and Emma Daly in defence, Southern Gaels had to work for every score. Christina and Alice in midfield defended and attacked tirelessly while supplying the star of the night, Laura Kelly, with some good passes to help her achieve a staggering 5 3 tally on the night.

Even though we lost 10 9 to 5 3 it was encouraging to see the girls make a gallant effort against a far superior team. 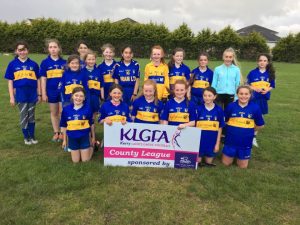 Our U12 girls took on Na Gael in the Div3 final in Ballyvelly on Monday night, 27th May. Maire Culloty and Aislinn Bailey, our joint captains, lead by example. Anna Collins and Jamie Lee O’Connor played some great football. Aoibhe O’Connor brought Ballymac back into the game 10 minutes before half time with a well taken goal that left us 5 points down, but, playing with a strong wind in the second half. Michelle O’Connor had a great chance of a goal just after the break, but, the Na Gael goalie came off her line to block the shot. Sarah O’Rourke in goals did very well and overall we defended strongly. Emma Daly slotted over a free she won herself and Anna Collins scored the other 2 points from frees.

On the night despite a great fighting performance Ballymac scored 1-03 against Na Gael 2- 09.

Well done to all the girls involved!