Ballymac played host to their near neighbours John Mitchels on Sunday 9th at 2 o clock. This was a keenly contested game with both teams giving their all. Ballymac were first on the scoreboard with a point from play from Vinny Horan. This was quickly cancelled out with a point by Niall Sheehy for the visitors. In the 3rd minute James Duggan’s shot at goal for the visitors was put out for a 45. Niall Sheehy pointed this for the visitors. Vinny Horan levelled matters in the 4th minute. Mitchels dominated the next 15 minutes scoring 5 more points. The visitors inside forward line was posing all sorts of problems for Ballymac. In the 18th minute Cian Counihan was black carded for Ballymac. Daire Keane came in to replace him. Paudie Mac got Ballymac back on the scoreboard with a point from play in the 19th minute. Mitchels went on to score 2 more points before the half time whistle, while Ballymac registered 3 points. These points came from Aidan Breen. Vinny Horan and Michael Herlihy. The half time score was Ballymac 0.6 John Mitchels 0.9
Two early points from Mitchels at the start of the second half put 5 points between the sides. A point from Vinny Horan in the 4th minute started Ballymac’s recovery. This was quickly followed by 2 points from Aidan Breen from frees. Mitchels hit back with 2 points from their corner forwards. The only goal in the game came in the 14th minute when Daragh Regan goaled for Ballymac. This just left 1 point between the teams. Two more points from Shane O Reilly and Aidan Breen put the home side in front for the first time in the game. Michael Kelliher levelled matters for the Mitchels. Three more points for Ballymac from Aidan Vinny and Paudie Mac put the home side in the driving seat. Alan O Donoghue pointed a free for Mitchels to reduce the deficit to 2 points. The visitors were then reduced to 14 men when their midfielder Michael Wrenn was sent to the line on a second yellow card. Ballymac went on to score three more points, one each from, Vinny Horan, Shane O Reilly and Daniel O Shea. Mitchels tagged on two more points to let the final score at Ballymac 1.17 John Mitchels 0.17 .
This was a brilliant second half display from Ballymac. Aidan Breen controlled matters at midfield and set up many attacks. Ballymac forwards tormented the Mitchels defence which led to scores from play and frees. Ballymac ‘s defence stood solid when Mitchels applied the pressure in an effort to get back on even terms.
BALLYMAC TEAM. Alan Bonn. Michael Sweeney. Con Reynolds, Micheal Reidy. Shane O Reilly, Gene Griffin. Luke Sweeney. Aidan Breen, Cian Counihan, Michael Herlihy, Daragh Regan. Padraig Mccarthy. Michael Hoare, Paul Culloty, Vinny Horan. Subs Daire Keane for Cian Counihan, Daniel O Shea for Michael Herlihy

Ballymac Senior Team:
The next game in The Senior Football League is on next weekend when we travel to Kenmare to play Kenmare. Check our Facebook page and web site for full details closer to the game. 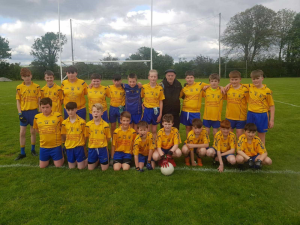 Pride of place this week goes to our U14 Gold Team who won the County League Division 9 Final on Friday night last. Well done to the players and mentors. Ballymac Abú!
U14 Gold Team: County Final Match Report
Our Ballymac under 14 team faced a strong Milltown/Castlemaine team in Division 9 County League final on a nippy evening of the 7th June 2019. The pitch in Currow was immaculately turned out for the occasion. Our captain Sam Mansfield ably guided a group from the under 14 panel that was supplemented by a group from the u12 squad.
Our boys started with vigor and established a good early lead. Milltown/Castlemaine battled back and scored a goal against the run of play late in the first half that brought the half time score to 2-6 to 1-4 in favour of Ballymac.
Milltown opened the second half with a brace of points and a great battle ensued with both teams scoring from breaks up the field. Ballymac were stronger with a 4 point lead at the end of normal full time but during injury time Milltown scored a goal and a point to leave both teams finishing in a draw (5-9 apiece).
A period of extra time 10 minutes a side was then played and the Ballymac team dug deep and scored 5 points to finish out indisputable winners on a score of 5-14 to 5-12.
Sam Mansfield complimented the Milltown/Castlemaine team for a sporting game, the Currow club for a fine pitch and match officials and the Ballymac management.
It was concluded by all attending that our recent good results at U14 augers well for future success at the club.

U 16 Boys:
Our U16 Boys will play in Division 2 of The Lee Strand County League. This competition commences on Wednesday 19th June when Ballymac are at home to na Gaeil at 7pm.

U12 Boys
Blue team
Ballymac blue team travelled to Killorglin on Tuesday evening. While heavy traffic delayed the team’s arrival the lads were
fast out of the traps in the game and used the slight wind to their advantage right from the get go. Three first half goals from Mairtin McKivergan gave the team a healthy lead at the mid point. Laune Rangers provided a much stiffer test in the second half but the players were up to the task, unwilling to let their first half lead slip. On the night Eoin Moriarty was impressive in the middle third and Maurice Harrington looked sharp in the forwards. Ballymac’s fifth goal effectively ended the contest with Ballymac winning on a scoreline of 5-18 2-12.
GOLD
Ballymac Gold Team 5-16 Laune Rangers 2-13
On Tuesday evening June 4th our Gold Team travelled to Killorglin to play Laune Rangers. A high scoring game with some fantastic football played.These boys worked so well as a unit,with some super fielding and accurate passing.We were leading 5-5 to 1-9 at half time.
In the second half Laune Rangers started well but our defence was superb.John Leen made some great saves.Donncha Enright and Shane Brosnan defended well.Padraig Reidy and Michael Quirke worked tirelessly throughout the game.Our forwards were in flying form again.Scores from Padraig Reidy,Sean Martin,Gearoid Healy,Luke Griffin,Sam Boyle,Paddy Lucid and Michael Quirke helped us secure the victory.
These boys were a joy to watch and as always played with great commitment and determination.
The teams are in action again on Sunday 16th at 6pm when they play Spa away.

Gold Team
Gold Team 4-12 Austin Stacks 3-2
Ballymac Gold Team played Stacks at home on Sunday June 2nd in their second game of Phase 2.
The boys played some lovely fast moving football in the first half .Ballymac were well ahead at half time leading 3-7 to 1-1.
In the second half our boys continued to play well ,moving the ball quickly with some excellent passing.
John Leen had a great game in goals. Our defence was solid and our forwards were in flying form: Our scores coming from Michael Quirke, Eoghan Joy, Gearoid Healy, Paddy Lucid and Sean Martin.
A great team performance as always by these boys.
On Tue 4th June our two teams travel to Killorglin to play V Laune Rangers at 6.45pm.

U10 Boys
Ballymac U10 Boys who took part in the Community Games football on Monday 3rd June. They won 2 out of their 3 games and lost out on making semi finals by points difference at the end . Well done to all the Boys. They had a good training session last Sunday morning and will train again on Wednesday.

U8 Boys:
Sunday morning U8 training had a super turnout this week. Our player of the week goes to Finn Hannah. The boys have a busy week ahead with Go Games in Cordal on Thursday evening and next week instead of the academy they have a match against Listry. Ballymac Abú.

Under 6:
All our U6 girls and boys players turned up on Sunday morning for fun and games. They learned how to pass the ball and kick the ball under the watchful eyes of the coaches! The rain did not dampen their spirits and they danced and sang their way to the end!! Congratulations to our U6 players of the week Scott Fitzmaurice & Natalia McDermott. Both worthy winners. Next week our U6 girls will welcome Austin Stacks U6s for a few fun games. In two weeks our U6 boys will take part in a Blitz. More on that next week. See you all next week.

Cul Camps 2019
Kellogg’s GAA Cúl Camps provide boys and girls – between the ages of 6 and 13 – with an action-packed and fun-filled week of activity during the summer holidays which revolves around maximising enjoyment and sustaining participant involvement in Gaelic Games.
Ballymac GAA Ground hosts two of the County Summer Camps as follows:
29th July to 2nd August
& 12th to 16th August
The Summer Camps can be booked online and the link is on The Ballymac GAA web site:www.ballymacgaa.com
Ballymac GAA Lotto Results from Monday 3rd June 2019
This weeks lotto draw took place in the Ballygarry House Hotel & Spa
The Jackpot was €3,100.00
The Numbers Drawn were: 3,22,23 and 24.
There was no Winner of the Jackpot.
Lucky Dip Winners were:
1. Joan O’Reilly c/o Tony Marshall
2. Nancy Elder, Tralee.
3. Tom Reidy. Kilmore
4. Bruce Hannah C/O Paula Silles.
5. Bridget Leen Ballymac
Sellers Prize – Tony Marshall
Next Weeks Jackpot is €3,200 and The Venue is Kielduff Community Centre,
Tickets for our Lotto are for sale at The Half Way Shop & Bar, O’Riodas, Boyles Hardware Clash and Horan’s Fruit and Veg, The Horan Centre Tralee. Tickets can also be purchased on line at Ballymac GAA web site. We thank all our lotto sellers and supporters. All your support is greatly appreciated.

Sympathy
We extend our sympathies to The Hanafin family Glounageenty, on the death of Mrs Eileen Hanafin. May he RIP.