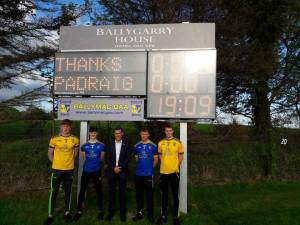 U16
Our u 16 Team played Currow in Cordal in the Castleisland District U 16 A Final last night- Monday night . Currow got off to a blistering start and were well worth their lead after 10 mins , leading by 1 02 and Ballymac had yet to score . A speculative high ball into the square by Donal Daly decieved the Currow keeper and the ball finished up in the back of the net for Ballymac’s first score . This seemed to settle the team , and a further 1-01 put us ahead for the first time in the game , our second goal coming from the boot of Sean Horan . Ballymac were in a battle and great praise must go to Currow for a hard fought first half performance. Ballymac lead at the interval by 2- 05 to 1- 04 .
In the second half , we dominated the early exchanges but didn’t register any score . It was Currow who scored the first point to reduce the deficit to 3 points . In a great spell between the 10 th and 18 th minute we outscored Currow by 2 05 Pts to 0 04 Pts, our second goal coming from Adam Kelly.
We continued to dominate right to the end and ran out winners on a scoreline of 5 12 to 2 10 . Kieran Slattery’s kick outs were outstanding, reaching the target time and time again , James Bailey was outstanding at full back , he was ably assisted by Adam Walker and Ryan McHugh . Denis Brosnan came storming into the game in the last ten minutes . Adam Kelly and Luke O’Connell worked hard . At midfield Cathal Culloty put no foot wrong and Daragh Sweeney was just awesome . Donal Daly Adam Sheehy and Sean Horan excelled, Sean finishing with a tally of 3 03 . Gary Lynch ,James Kenny and Brian Godley can also be proud of their performance. Subs used on the night were Maurice O’Connell( 2pts ) Jamie Sugrue (1pt) Eoin Creedon, Mossie Brennan and Mark O’Connor . Thanks to all players and subs for a fantastic performance. Thanks to all parents who travelled to support our team on the night . Thanks to Currow for a fine sporting Game and they can be proud of their performance, battling on to the end . Thanks to coaches Stephen O’ Brien, Liam Sweeney, Mike Broderick and Eddie O’Connell for having the team in fine shape on the evening . James Bailey accepted the trophy on behalf of the Ballymac Team . We look forward to the county league in a couple of weeks and best of luck to all the players doing their junior cert in the coming weeks . Mile Buíochas

U15
The future stars from Ballymacelligott GAA Donal Daly & Luke O’Connell played with the Kerry U15 Development Squad on Saturday last in Kerry’s Centre of Excellence in Curran’s. The Kerry Squad defeated Kildare Development squad.
One of the U15 Coaches on the squad is our own Kieran Savage
It is great to see two boys from the club wearing the Green & Gold. Well done and continued success to both players and to Kieran as County Selector and Coach.
Our U15 players will take part in the Munster U 15 Super 10’s Competition. Round 1 will take place on Saturday 1st June. Our boys will play in Dr Crokes and the other teams in the group are: Tuosist/Kilgarvan, Dr. Crokes and Laune Rangers. The Top team in the group will qualify for the Munster Final which take splace on the 15th June. Best of luck to our U15 players.

U14
Congrats to our u14 player’s who were part of the Castleisland District u14 team on Sunday who comprehensively defeated West Kerry in the Plate Championship round 2 in Castleisland, Sean Rice (Captain) Niall Collins, Diarmuid Galvin, Conor Martin and Skye Lynch. The County League U14 Division 9B Final is on Friday 7th June against Miltown/Castlemaine venue to be decided.

U12 Our U12s did not have a game this week. We send our best wishes to the Gold and Blue teams for the next phase of the County League.
The upcoming games are as follows:
Tue 28th May playing at home V Rathmore at 7pm.
Sun 2nd June playing at home V Austin Stacks at 6pm.
Tue 4th June playing away V Laune Rangers at 6.45pm.
Ballymac GAA Academy News

U10 Boys
Ballymac U10 Boys had a good turn out on Sunday morning those to impress were Liam O’Rahilly, Seadhna O’ Briain, Adrian O’Connor, Ryan Burke and Jack Collins.

U8 Boys:
Last Thursday was a fine evening in Ballymac for the U8 Go Games. Thanks to everyone from the Ballymac GAA family who turned up to help out. The boys had lots of fun and the future of Ballymac is looking bright. Ballymac Abú!
Our U8 boys were on top form this morning at training. We had a great turnout.
Well done to Evan Freeman who has a double celebration this week. He turns 7 on Wednesday and is our star player of the week.

Under 6
We had a great turn out of U6 players on Sunday morning. They were all eager to learn and had some great fun while learning new skills. Well done to our two players of the week: Evan Freeman and Chloe Foran.
Looking forward to seeing you all next week. Do not forget to bring your water and your moth guards!!
Parking/Traffic Arrangements for Sunday Academy.
For Health & Safety reason on every Sunday morning we ask all parents dropping off children to the academy , to park outside the Main Gates and walk into the pitch with children. The Main gates will be closed as its too dangerous immediately after training to accommodate all the cars leaving etc. We thank you all in advance for your cooperation and understanding.

Congratulations:
Well done to Kate Collins from Ballymac GAA Club who will represent O’Breanann School in the Cuman na mBunscoil game on Saturday evening next in Ennis when Kerry V Clare in Ennis.
Congratulations to Ciara Murphy from Ballymac who won a Gold Medal in u12 Solo Singing at the National Community Games Finals held in UL over the past weekend.

Ballymac GAA Lotto Results from Monday 20th May
This weeks lotto draw took place in the Halfway Bar Ballymacelligott. The Jackpot was €2,900 The The Numbers Drawn 3, 5, 23, 26 There was no Winner Lucky Dip Winners were: 1. Owen Lyons, c/o Tom Leen 2. Tina O’Connor, Castleisland 3. Lily Moore, Chutehall 4. Peig Looney, c/o Tony Marshall 5. Moira Scanlon, Tralee who was online winner Sellers Prize – Tom Leen Next Weeks Jackpot is €3,000 and The Venue is O’Riadas. We thank all our lotto sellers and supporters. All your support is greatly appreciated. Support our lotto by clicking here now and you could win the €3,000.00 jackpot.