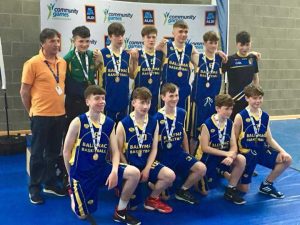 Pride of place this week goes to our u16 Boys Basketball team who were crowned Community Games National Champions over the weekend.

In their semi final on Saturday  against Malahide of Dublin they ran out 48-37  winners following a game that was much closer than the final score would suggest.

This qualified them for the Final on the Sunday against Maree of Galway where another ding dong battle took place.Our boys showed great heart and skill to ensure that when the final buzzer went it was they who would be going home with the Gold medals winning on a 48-44 scoreline.

Certainly this is a marvellous achievement by all involved to bring an All Ireland title to the Parish.

Special mention must be made of coach Jack Culloty who has put in hours of preparation to achieve this accolade.

Mention must also be made of our u12 Group Singers who came 4th in their Competition.Many thanks to Theresa Murphy and Fidelma Landers for the time they have invested in this very talented group.

Rachel Creedon also performed exceptonally well in u13 Gymnastics finishing just outside of the medals positions following an excellent performance.