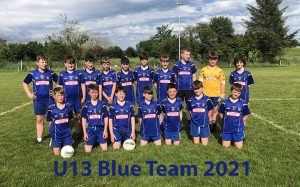 The U13 Blue team play in Division 3 and the others in the group are: Glenflesk, Ballyduff, Milltown/Castlemaine, Listowel Emmetts and Na Gaeil.

The U13 Gold  team play in Division 9C  and the others in the group are: 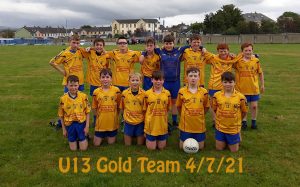 There are no games next weekend to facilitate anyone going to The Munster Final.

Our U13 Blue and Gold teams are in action in the Lee Strand County League with games commencing on Sunday 16th June.

The Blue Team Play in Division 2 and  Fixtures are as follows:


The Gold Team Play in Division 10 and  Fixtures are as follows:

Notes for Teams & Referees
U-13 games to be played on Sunday evenings.
The top team in each division at the end of each phase to receive a set of medals.
U-13 County League Rules:
✓ Games to be 25 minutes a half.
✓ 15 a side games with the option of 13 and 11 a side to facilitate Clubs with smaller numbers.
✓ Unlimited Subs are allowed.
✓ Size 4 football to be used.
✓ Pitch dimensions:
❖ 15 a side: Goals on 13 metre lines, full width.
❖ 13 a side: Goals on 13 metre lines, narrow side-lines 10 metres on both sides.
❖ 11 a side: Goals on 20 metre lines, narrow side-lines 10 metres on both sides.
✓ Goalpost dimensions to be circa 4.5 metres x 2.2 metres.
✓ Play is restricted to one-hop and one-solo.
✓ No foot dribble i.e. no more that two foot-touches along the ground.
✓ All Kick-Outs from the hand and 13 metres from the end line.
✓ Square Ball rule will apply but there are no penalties.
✓ “Mark” rule will not apply as Kick-Out are allowed to be taken off the hand.
✓ Advance Mark rule will not apply.
✓ All 45s are taken from the ground.
✓ Sin Bin rule will apply.
✓ Five Goal Rule applies and includes any periods of extra-time, if played.
Any Clubs with two teams in a competition must submit their first-12 (plus second-12 for three teams)
at least two days before the second-round games.
Referees to be appointed by the relevant committee in charge.
❖ Club appointed to referee a game are obliged to pay the Referee €30 for each U-13 game.
❖ If the appointed Referee fails to turn up and a neutral Referee is not available, the travelling team
shall appoint the Referee.
First named team has home advantage. If pitch is unplayable home Clubs are expected to give at least
3 hours’ notice of any pitch problem. If suitable alternative is not found, home team travels to the
opposition. Last minute weather conditions may result in pitch problems and then the referee must
decide if pitch playable.
❖ In the event of a team not fulfilling a fixture (a) such team must travel to opponent’s venue in the
following season (not applicable where there is a new draw for the leagues) and (b) a fine may also
be imposed by the C.C.C..
As per the Covid 19 Guidelines, Teams must submit a complete list of all players (recommend the
use of the Official Team Sheet from the Foireann registration system), in duplicate, to the Referee prior
to the game. The list must clearly indicate the players that will start the game and also any players that
are available to come on as substitutes. It will not be necessary to give the players name to the Referee
for each substitution made. Players may come on and off any number of times during a game, but
only during a break in play and with the permission of the Referee.

If a team has an issue about the eligibility of an opposing player, the Mentor should ask the Referee to
(a) take the player’s name (b) get the players signature and date of birth.
Players are required to wear mouthguards during all matches and practice sessions.
Fixture queries must be addressed to the Co-ordinator in the first instance. For unresolved queries you
can then contact the Coiste na nÓg Secretary, Kathy McCarthy via email.
The points cut-off for ranking of teams in the U-13 County League will be determined on the night of
the final round of the group stage of the competition, irrespective of whether there are any back games
to be played.
In the event of colour clash of jerseys, if it’s a home venue the home team change jerseys, if it’s a
neutral venue both teams should change jerseys. In the case of amalgamated teams, the onus is on
the amalgamated team to change, irrespective of venue.
Requests from Clubs to video games must be submitted through the Club’s Coiste na nÓg Secretary
to Kathy McCarthy three days prior to the game. Print and bring the approval email to game as proof
of permission to record.
No re-arrangements of games will be allowed after the times indicated in the underneath table for all
grades except in exceptional circumstances (see note below).
• Exceptional Circumstances:
✓ Death of a parent or sibling
✓ Death of a Senior Board Chairperson/Secretary or Coiste na nÓg Chairperson/Secretary
✓ Weather warnings (Orange and Red)
✓ Other exceptional circumstances at the discretion of and with prior approval of the C.C.C.

• Prior to the dates stated, any Club wishing to change a fixture must follow the six steps outlined
below for such a request to be considered:
1. Seek permission from the Co-ordinator
2. Agree change with opposition team
3. Agree new time with opposition team
4. Email the Co-ordinator, Coiste na nÓg’s Secretary and P.R.O.
5. Notify the Referee
6. Re-arrange appointment of Referee for new fixture

FAIR PLAY RECOMMENDATIONS:
All players in their final year (13 years) to play for at least half the game.
Players that are two years younger than the Age-Limit not to be allowed play, if there are any players
older than them on the sideline. (This means that U-11 players could not play with the
U-13 Team if any 12 year olds or 13 year olds are on the sideline).

All results to be forwarded to Co-ordinator Tim Clifford (086–3851647) by home team via
text or WhatsApp by 9pm on evening of game. Please ensure each Club designates a
person to forward the scores.