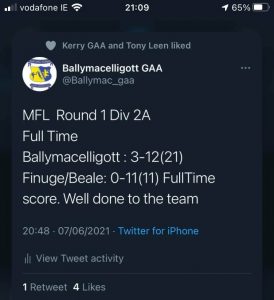 Our u 17 Team played Beale / Finuge in Ballymac on Monday 7 th of June in round 1 of the Division 2 A county league .
A light drizzle before the game made conditions sloppy on the pitch .
The visitors were first off the mark with a fisted effort from Robert Stack , but Ballymac soon responded with a point from Niall Collins .
A great battle took place around the middle of the field , with 3 Kerry minor panelist’s on view .

Our own Donal Daly was winning some great Ball , and Niall Collins was having a dream start having clocked up 4 points after 20 mins.

Ballymac edged in front in the second quarter when Donal Daly had the ball in the net from a penalty.  The visitors replied with some points of their own from their talisman Kelton Molloy .
A fisted point from James Kenny & a goal by Gary Lynch give us a six point cushion at the interval,  Ballymac leading by 2 08 to 08 points .

Ballymac got the dream start in the second half when Niall Collins pointed to bring his tally to 6 points .
Soon after Maurice O’Connell had the ball in the visitors net and a further point off the left peg gave us  a comfortable cushion as we headed for the last ten minutes.

Kieran Slattery was outstanding in goals keeping a clean sheet. His kick outs were sublime . Our backs were outstanding right  throughout the game , repelling  the visitors forwards time & time again . Skye Lynch reignited our midfield section and his point from 30 yards was sublime.
Our forwards created some wonderful scores and can be proud of their performance.
They were unlucky with some of their chances but the link up play was sublime.
Over  all a great start to the County league , thanks to Finuge / Beale for a fine sporting game  and
thanks to all parents for supporting us on the night . 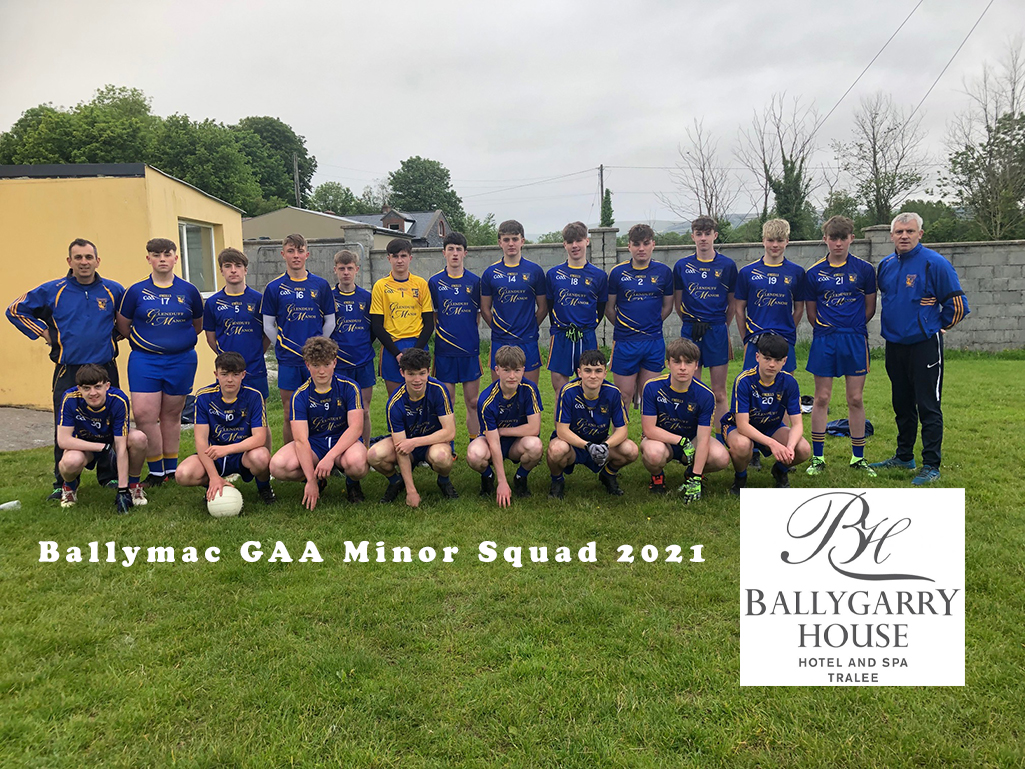 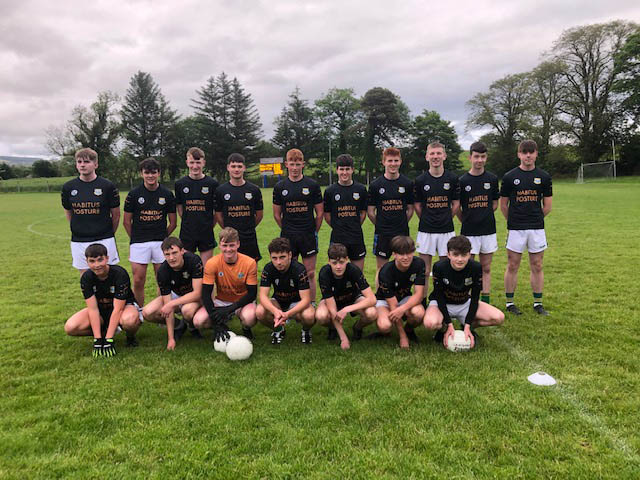 Well done to our Minor Team and Management. It lifted our hearts to see the boys play so well as a team. It was a long winter. Tonight was a tonic for everyone

Our u 17s , with a panel of 18 players began training on  Monday 26 th of April under the stewardship of Chris Flannery, Eddie O’Connell and John Rice. Great credit to all players for a huge effort put in at in training and they are looking forward to the County League.

First up is Finuge/ Beale in the first round of the County league Division 2 A on Monday next  7th June.
They play Moyvane in Moyvane the following Monday evening 14th of June.

The Minor County League Commences on Monday 7th June . Our Minors are at home to Finuge/Beale in the First Round and the game is at 7.30pm.

Our preparations have been going very well over the last couple of weeks and we would like to thank the players for putting in a huge effort to get fit and ready for the resumption of the County League. Ballymac Abú!

We would like to wish the Best of luck to all players & Coaches in the County League.

Subject to exceptional circumstances, players on the county minor panel will be free to play with their clubs in the league. This policy only applies where games are played on date confirmed on Fixtures Calendar.

Where long distances are involved CCC have the right to fix game at a neutral venue – CCC to decide which games.

In relation to semi-finals from 1A to 5B:

If there is a tie, the result of the league game will determine placing in the first instance, followed by scoring difference as per Rule 6.21 & 6.38 O.G 2021.

If a play-off is necessary, CCC to decide venue.

Extra time & Winner on the Day will apply in Semi-Finals and Finals.

If home pitch is unplayable or unavailable the home club is expected to give at least 3 hours notice. A suitable alternative must be found and, if not, the home team must travel to the opposition.  Failure to adhere to this may mean loss of points.

If two of the teams have beaten the third team, the league result will determine the placing between the two “winning” teams, while the “beaten” team will be in 3rd place e.g. a beat b, b beat c and a beat c. The placing will then be (1) a (2) b (3) c

Conceding a game will be taken into consideration by the CCC in determining placings. Teams with least no of games played as a result of not fulfilling a fixture will be placed below any other team with same number of points.

No change will be allowed to fixtures after midnight on the previous Wednesday of the game. The only exception is where the CCC deem it necessary.