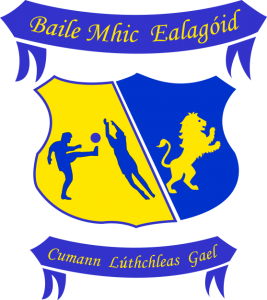 A game of two halves was the order of the day as Ballymac triumphed over St Pats on a night where conditions made it difficult for both teams. Despite this there were some magnificent scores and good play on both sides.

Both sides split the first four points between them before St Pats took over in all areas, winning kickouts,turnovers and dominating the play. They eked two points clear before a well worked goal followed by two quick points gave them a comfortable cushion. However, in a critical 5 minute spell before the half ended Ballymac scored the last 2 points to leave the score at a 1-6 to 0-4 deficit.
Upon resumption of the second half the men in blue and gold were transformed in all areas, most notably their support running and point scoring.
Ballymac scored an amazing 1-9 without reply, hemming the the opposition into their own half and dominating all aspects of play.
Such was their dominance, St Pats only mustered one late free to leave the score 1-13 to 1-7 in favour of the Ballymac men.