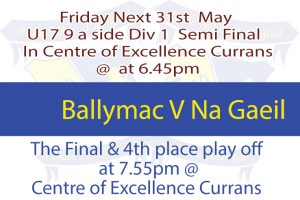 The  semi finals and finals of the  U17 9 a side club competition will take place on Friday night next, the 31st May  at the Centre of Excellence in Currans.
Our U17 team play in Divsion 1 and this Division also includes: St Mary’s Renard, Na Gaeil and Kerins O’Rahilly’s.
Fixtures  Semi Finals @6.45pm
St Marys Renard V Kerins O Rahillys
Na Gaeil v Ballymacelligott

Round 2 Results:
Ballymac Hosted the games last night 27th May and the results are as follows:

The next round of the competition the semi finals and Finals will take place over the weekend of Friday 31st May 2019.

16 teams will qualify for Semi Finals

Semi Finals and Finals will be played on the same Day

The next round of this competition will take place on next Monday night 27th May. Ballymac hosts the games.

At the last minute Churchill were substituted by An Ghaeltacht in Ballymac pitch that hosted this group of games tonight Monday 20th May:

The next round of this competition will take place on next Monday night 27th May. Venue, opposition  and time to be confirmed.

Our U17s take part in an U17  9 a side Club Competition that The County Board  is organising and running over the next few weeks. The first three games take place in Ballymac on Wednesday next when we play : Gneeveguilla and Churchill.
We first play Churchill at 6.45pm,then we play  Gneeveguilla at 7.25pm. Churchill will play Gneeveguilla in the last game.
All  games this week  are on In Ballymac.
Please support the team and Management!!

The U17 Non Exam League is run by Kerry Coaching & Games. It is a 9 a side game. 9 a side football is fast, open and exciting and something different for the players..

Format for the Competition

Wednesday 22nd  May with first Games staring at 7pm

The first three Groups in Round 2 will be made up from the following:

Groups four, five and six will be made up from the following teams:

The organising committee will decide the position of clubs within groups in Round 2.

Weekend of Friday 31st May

16 teams will qualify for Semi Finals

Semi Finals and Finals will be played on the same Day

The following players are not eligible to play in the competition: