Our u 16s play challenge games against Knock/ Brosna/ Duagh  in knocknagoshel at 7 on Thursday night and in Currow at 7 on Monday night next in preparation for phase 2 of county league .
Best of luck to players & coaches.

Our UU16 s played Kerins O’ Rahilly’s in Strand Road on Thursday night in Round 3 of the county league .
Playing with a stiff breeze Ballymac were quick off the mark , with a beautiful strike on the left foot from Maurice O’Connell . Kerins O’Rahilly’s replied immediately with a point of their own . However in the next play , a long delivery from Donal Daly found Maurice O’Connell , who quickly side stepped his defender to unleash a powerful shot to the roof of the net to leave the score 1 01 to 0 01 .
Rahilly s replied immediately to score a goal off their own in a blistering opening ten minutes to the game .
However Rahilly’s slowly took control to score 2 further goals and 4 points to sail into a comfortable lead . However 2 points , one from Donal Daly & one from Maurice  O’Connell reduced the deficit to 5 points on a halftime scoreline of 3 05 to 1 03 to Kerins o Rahilly’s .
Rahilly’s were quick off the mark with some early points early in the second half , however 2 further goals from Donal Daly had us right back in the game . 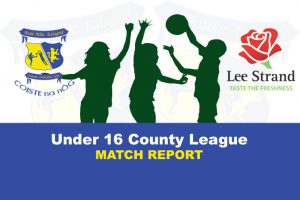 James Kenny ,Eoin Creedon ,Gary lynch, Andy Rogers & Sean Rice really upping their performance at this stage . Rahilly s responded in style again & kicked 5 unanswered points to go further ahead . A fisted effort (point) by Sean Rice , was added by another Maurice  O’Connell point.
Two further goals from O’ Rahilly’s killed off the game as a contest , but Ballymac tried to the end with 4 further points from Donal Daly to leave the full time score 5 12 to 3 09 to O’ Rahilly’s

Tommy palmer was solid in Goals.

Our defence of Luke & Aidan Horgan  James Kenny, Eoin Creedon Gary lynch & Diarmaid Galvin held firm and were not found wanting.
Sean Rice & Donal Daly worked so hard at midfield.
Up front , Niall Collins ,Dylan Roome ,Andy Rogers  , Maurice  O’Connell , Adam Wharton & Luke  O’Connell excelled . Subs introduced Michael Prendergast, Sam Mansfield,  Raymond Lowe & Skye Lynch really tried hard and have shown great improvement & enthusiasm.
This was a much improved performance from our boys and this shows the hard training done in the last couple of weeks has paid off .
We thank all the players for their continued effort and wish them the best of luck in phase 2 of the county league .
Thanks to all parents for their support on the night . Thanks to O Rahilly’s for  a fine sporting game .
Phase 2 of the u 16 County League begins on Monday the 17 th of August .
Good Luck to St Kieran’s
Best of luck to St Kieran’s minor Team (u 17) next Monday night as they take on St Brendan’s in the first round of the county championship.
Ballymac have several players in this team and we wish them the lads all the best in the Campaign ahead .

Under 16 County League
Round 2

Our u 16s   traveled to Connolly Park on Monday night to take on the locals in Round 2 of the county league .
An early point from Maurice O’Connell got us on the score board  but Stacks were soon level minutes later . The Rockies , playing with the aid of a slight breeze , scored two goals of their own to race into a six point lead.
However Ballymac responded well with a goal from Michael Prendergast ,  and further points from Donal Daly & Maurice oO’Connell had us back in the game .
A further goal from Austin Stacks was cancelled out when Michael Prendergast was dragged down in the square and upped stepped Andy Rogers to duly dispatch the ball to the back of the net . The Rockies replied quickly with a goal and 4 points .
James Kenny pointed   with a fine solo effort , and immediately afterwards Skye Lynch made a telling run through the Stacks defense to score another point for Ballymac to leave the half time score Ballymac 2 05 , Austin Stacks 3 07 .
Ballymac battled hard in the second half and Stacks were finding it much harder to penetrate our defense . Andy Rogers ,Sean Rice ,Eoin Creedon, Luke & Aidan Horgan were outstanding.
Niall Collins had the ball in the Stacks net  early in the second half following a great block down , however the Rockies replied with points of their own to keep their nose in front . A wonderful Goal from Gary Lynch cut the deficit to 3 points & lead us in for a grand finish with 5 mins left . However Stacks replied with further points to run out winners on a scoreline of 3 15 to 4 06 to Austin Stacks.
Congrats to Ballymac on a wonderful performance. Thanks to Austin Stacks for a fine sporting game .
Thanks to all parents who supported us on the night .
———————————————————————————————————————————————————–

Match Report: Ballymac V Ardfert
Ballymac U16 s entertained Ardfert in the first round of the county league in Ballymac last night Monday 20th July.
Both sides were even in the first fifteen minutes, Maurice O’Cconnell scoring the opening point for Ballymac .
Ardfert seemed to be more dangerous going forward and this was the case in the 20 th & 23 rd minute when scoring 2 goals to lead 2 04 – 0 03 points after 23 minutes. A spectacular point from 45 yards from Donal Daly was followed by 2 points in succession from
Maurice O’ Connell to reduce the deficit to 4 points .
Ardfert replied with 2 points of their own to push further ahead . Ballymac replied through Gary Lynch & Niall Collins to reduce the deficit once again as the interval approached.However 2 further goals & 3 points put Ardfert in a commanding position at the interval on a scoreline of 4 -09 to 0 -08.
Ardfert played with the advantage of a slight breeze in the second half. A few early scores put Ardfert in the driving seat , and never looked back from here on . Michael Prendergast hit the net for a wonderful Goal for Ballymac but it was only a consolation score at this stage . Congrats to Ardfert on a fine performance, and congrats to Ballymac for fighting right to the end .
Thanks to all parents who supported us on the night 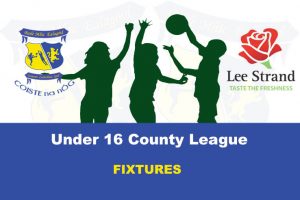 Rules Governing U16 County League
U-16 County Football League is played to the Full Rules and Full Pitch as per the current GAA Official Guide.
The Advance Mark & Sin Bin rules will apply to U-16 competitions.
The five-goal rule does not apply to the U-16 competitions.
Unlimited Subs are allowed for all U-16 County League games.
If a team has an issue about the eligibility of an opposing player, the Mentor should ask the Referee to (a) take the playrer’s name (b) get the players signature and date of birth.
Any team for both Football & Hurling wishing to change the time of a fixture must go through the following six steps within the above deadlines:
1. Seek permission from the Co-ordinator
2. Agree change with opposition team
3. Agree new time with opposition team
4. Email the Co-ordinator, Secretary (Mags Evans) and the PRO
5. Notify the Referee
6. Re-arrange appointment of Referee for new fixture
All results to be forwarded to coordinator Garry Murphy (087-9432746) by home team via text or WhatsApp by 9pm on evening of game. Please ensure each club designates a person to forward the scores.