Our u 16 Team played Currow in Cordal in the Castleisland District U 16  A Final last night- Monday night . Currow got off to a blistering start and were well worth their lead after 10 mins , leading by 1 02 and Ballymac  had yet to score .
A speculative high ball into the square by Donal Daly decieved  the Currow keeper and the ball finished up in the back of the net for Ballymac’s first score . This seemed to settle the team , and a further 1-01 put us ahead for the first time in the game , our second goal coming from the boot of Sean Horan . Ballymac were in a battle and great praise must go to Currow for a hard fought first half performance. Ballymac lead at the interval by 2- 05 to 1- 04 .

In the second half , we dominated the early exchanges but didn’t register any score . It was Currow who scored the first point to reduce the deficit to 3 points . In a great spell between the 10 th and 18 th minute we outscored Currow by 2 05 Pts to 0 04 Pts,  our second goal coming from Adam Kelly.

We continued to dominate right to the end and ran out winners on a scoreline of 5 12 to 2 10 . Kieran Slattery’s kick outs were outstanding, reaching the target time and time again , James Bailey was outstanding at full back , he was ably assisted by Adam Walker and Ryan McHugh . Denis Brosnan came storming into the game in the last ten minutes . Adam Kelly and Luke O’Connell worked hard . At midfield Cathal Culloty put no foot wrong and Daragh Sweeney was just awesome . Donal Daly Adam Sheehy and Sean Horan excelled, Sean finishing with a tally of 3 03 . Gary Lynch ,James Kenny and Brian Godley can also be proud of their performance.
Subs used on the night were Maurice O’Connell( 2pts ) Jamie Sugrue (1pt) Eoin Creedon, Mossie Brennan and Mark O’Connor . Thanks to all players and subs for a fantastic performance. Thanks to all parents who travelled to support our team on the night . Thanks to Currow for a fine sporting Game and they can be proud of their performance, battling on to the end . Thanks to coaches Stephen O’ Brien, Liam Sweeney, Mike Broderick and Eddie O’Connell for having the team in fine shape on the evening .
James Bailey accepted the trophy on behalf of the Ballymac Team .
We look forward to the county league in a couple of weeks and best of luck to all the players doing their junior cert in the coming weeks .
Mile Buíochas . 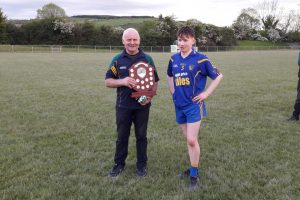 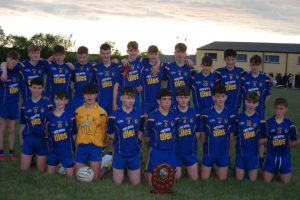 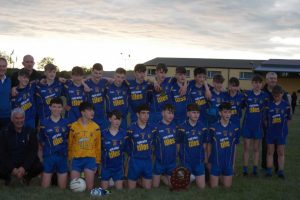 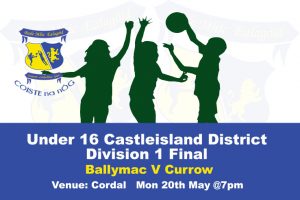 Please support our U16 team in The Castleisland Final