Our u 17s played   Milltown/Castlemaine in the Division 2 Central Region Final in na Gaeil yesterday.
Our boys had been beaten in the 2nd round of the competition by the Mid Kerry team and were under no illusions of the task ahead in this final .

A light drizzle made conditions slippery , but our boys were quick to settle with two early points from Maurice O’Connell .
Milltown/Castlemaine  replied immediately with 2 points of their own to tie up the game .
Our forwards were getting on top and Gary Lynch put us up a point soon after with a great strike off his left boot .
Jack Slattery had the ball in the net soon after and this gave us a five point lead at the first water break .

On the resumption our boys continued to pile on the pressure, and another brace of Goals from Shane Gilroy and Maurice O’ Connell gave us a nice lead coming up to half time .
Kieran Slattery pulled off a fine save and Eoin Creedon made a vital interception to keep the mid Kerry boys at bay .
Milltown /Castlemaine  replied with a couple of points of their own to keep the scoreboard ticking over .
A further Goal and 2 pointed frees from Niall Collins gave us a commanding lead of 4 08 to 0 07 points at the half time break .

In the second half the mid Kerry boys really stormed back and put the pressure on our boys from the start .  3 points on the trot reduced the deficit to 10 points .
A point from Maurice O’Connell stemmed the tide , but the mid Kerry boys were not going to give up .  3 more points from Milltown/ Castlemaine  reduced the deficit to 7 points at the 2 nd water break .Ballymac were leading 4 09 – 0 12 points .

But great credit to our boys for holding on and stemming the mid Kerry boys in the last Quarter . Time & time again they denied their opponents opportunities to score by intercepting the ball at different stages .  Milltown/ Castlemaine scored 4 more points in the last quarter but our boys were not to be denied and held on to win on a final scoreline of 4-09- 0 -17 points in favour of Ballymac .

Eoin Creedon and Sean Rice accepted the trophy on behalf of the Ballymac team .
Thanks to Kellihers Toyota for sponsoring the competition.

This was a great result for our boys , all the hard training has paid off over the last couple of months.
Ballymac GAA are so proud of the boys and their families should be so proud of them.
Thanks to all parents , Families &  officials for their fantastic support over the last few months and especially today for coming out in the rain and supporting the players.

Thanks to Milltown/ Castlemaine  for a fine sporting game and great credit to them for a great comeback in the second half .
We look forward to meeting them again in the semi final of the County League .

This is another great achievement for our club and we thank coaches Eddie O’Connell, John Rice and Chris Flannery for all the work they put in all year. Our Coiste na nÓg officers Declan O’Connell and Ger Collins and our Coaching Officers Stephen O’Brien have worked hard all year with our underage players. They and our brilliant team of coaches have complimented the work at the senior level. We thank them all sincerely.

A special Thank you to Eddie O’Connell mentor, coach and PRO for the team. Eddie’s  updates and  match reports are always right up to date and we thank him for this additional work all year. Míle Buíochas Eddie.

The Ballymacelligott Play Ball Lotto has a Jackpot of €10, 300 next Monday night.

Click here and you could be in with a chance of winning this amazing Jackpot and you will also support our teams. 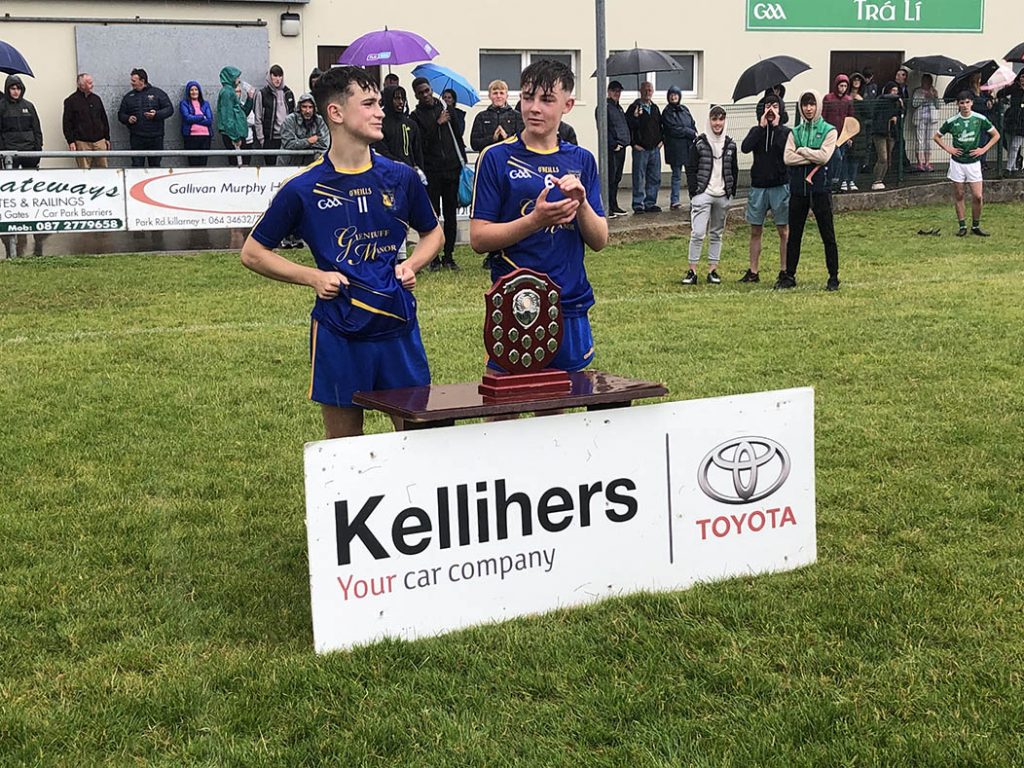 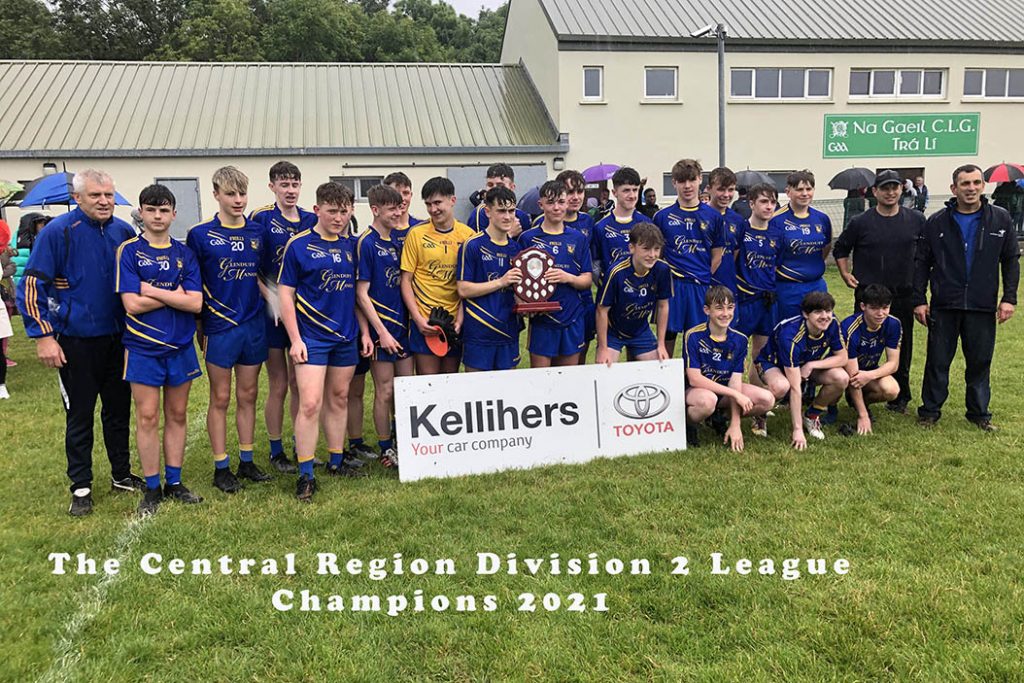 2Our u 17 s played Annascaul / Dingle / Lispole in the semi final of the Central Region in Ballymac on Monday night  the 26th July 2021.
A minute s silence was observed before throw in for Mary Lynch , Grandmother to Skye our u 17 panelist . May she rest in peace .

Ballymac looked lively from the throw in , Maurice O’Connell with 2 early points to settle any nerves that the team may have .
A further point from Gary Lynch had us 3 points up after 10 minutes.
However the West Kerry side had their first point on the 12 th minute and this was the score at the first water break .
After the restart James Kenny had the ball in the back of the net , giving us a lead of 6 points . Some of the exchange’s were quiet physical but fair play to our boys they kept the score board ticking over and added 3 further points 2 from the boot of Niall Collins and one from Sean Rice. As the interval approached Maurice O’Cornell James Kenny & Gary Lynch added further points  to leave the score at 1 09 – 0 06 to Ballymac.Early rain made conditions difficult for both teams , and in a low scoring second half we outscored our opponents by 4 points to 1 pt .
Our scorers were Niall Collins with 2 and Maurice oO’Connell with 2 .
Great credit to both teams for playing so well in difficult slippery conditions and thanks to all supporters who supported us on the night .
We now qualify for the final to be played next weekend a date and time has to be confirmed.
Thanks to Kellihers Toyota Tralee for sponsoring the competition.
———————————————————————————————————————————————————————-

Our u 17s played against St Mary’s / Renard on Monday night (12/7/21) in round 3 of the Central Region sponsored by Kelliher s Toytota Tralee .
The visitors played with the wind in the first half and took an early lead with some fine points from Ssome lovely passages of play .
Maurice O’Connell got our boys off the mark in the 4 th minute with a point  The visitors were on top at this stage and added further points to lead by 3 points at the 1 st water break .
Further points from Gary Lynch, Niall Collins and a superb solo effort from Luke O’Connell brought us level with 5 mins to half time .
A goal and a point to the visitors gave them a half time lead of 4 points , the score read 1 06 to 0 05 at the interval.

Our boys added 4 points on the trot to tie up the game 5 minutes into the second half , 2 from Niall Collins and 2 from Maurice O’Connell . But the visitors were dogged and added 2 more points to lead at the water break in the second half .

But in the final quarter our boys really turned on the style . Gary Lynch had the ball in the net after 2 minutes, Niall Collins with 3 further points and Maurice oO’Connell with 3  put  us in a great position with 5 minutes left . Sean Rice with a fine individual effort pointed from close range to widen the gap . St Mary’s / Renard had a goal of their own, but  a superb point following hard work from Skye Lynch caught the eye of the home support. Eoin Creedon fisted a fine effort over the bar but  the loudest cheer of the night was heard when Mossie Brennan had the ball in the net to leave us convincing winners on a scoreline of 2 19 to 2 09 .
Well done to all players for a massive effort in the last quarter and for digging out a result when it looked like the game would slip away from us  time and time again.
Thanks to St Mary’s / Renard for a fine sporting game , and thanks to everyone who supported us on the night .

Our U17 team did battle with a Milltown / Castlemaine team team last Monday night (5/7/21) at the pitch in Ballymac in the Kelliher’s Toyota Central Region Div 2 league.

We faced a tough opposition with a bare 15 players. Our backs deserve special mention in holding their formation against an attacking opposition and did well to concede only one gaol. Kieran Slattery had a good game between the posts. Andy Rodgers, Eoin Creedon and the Horgan twins proved their steel and denied multiple scoring opportunities.

Up front Maurice O’Connell, Niall Collins and Gary Lynch played well and between them put 5 points on the score board for Ballymac.

We were five points down at halftime but our tired legs were no match for the visiting team who ran out deserving winners on a scoreline of 1- 18 to 0-5.

A special go raibh maith agaibh to Shane Gilroy and Conor Martin who joined our ranks at short notice and acquitted themselves well in the game.

Our u 17 Team travelled to Lispole on Monday night 28th June 2021  to take on Dingle/Annascaul/Lispole in the first round of the Kellihers Toyota sponsored Central Region League.
Our boys playing with a slight breeze were quick off the mark with a goal and a point from Maurice O’Connell.
A further goal from Gary Lynch and a beautiful point off the left foot from 30 yards  had us 2 02 ahead after 7 mins . However the home team replied with 3 points of their own to leave 5 points between them at the 1 st water break .

On the resumption the lively Niall Collins had the ball in the net to push us further ahead . Raymond Lowe who was having a night to remember was unlucky with 2 goal bound chances.  Further points from Niall Collins ,Maurice O’Connell & a goal from Skye Lynch had us in the driving seat coming up to half – time. However the home side kicked some fine points and added a goal to leave the halftime score 4 04 – 1 06 , Ballymac leading by 7 points .

On the resumption Ballymac took the game to the home side , playing against a slight breeze and added further points from Maurice O’Connell and Niall Collins (2) .
Our defense were heroic in the second half , Eoin Creedon was inspirational, Andy Rogers intercepting on several occasions.
Luke O’Connell was rock solid at centre back and was well supported by the Horgan twins Luke & Aidan .
The Home side kicked a further 5  points  to reduce the gap , but our boys were not going to give in .

Kieran Slattery, Mossie Brennan, Conor Martin,  Sam Mansfield & Shane Gilroy can be proud of their contributions, the ever reliable Sean Rice & Diarmuid Galvin worked tirelessly at midfield and put in a great performance.
Gary Lynch tormented the full back line time & time again and can be proud of his nights work . Raymond Lowe was unlucky in the second half when his shot rebounded off the cross bar , but he was getting himself in some great positions tormenting the home side regularly.
Our boys ran out winners on a scoreline of 4 10 to 1 11.
Thanks to Lispole/Annascaul/Dingle for a fine sporting game , and thanks to all parents & patrons who supported us on the night .
Thanks to Roland Rogers for refereeing the game at short notice as the appointed referee was unavailable .

We send our Best wishes to our U17 Minor Team as they start their Central Region Campaign on Monday next .

Our U17s play in Division 2 of The Central League and the teams in this Division are as follows: