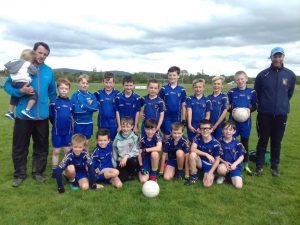 Our u10 boys team took part in the John Mitchels Blitz held on Saturday last.
Our first game saw us take on eventual winners Churchill who took an early lead which we found hard to pull back resulting in a five point win for the Churchill boys.
We then struck form which resulted in wins over Kerins O Rahillys,Ardfert and Beale before our final group game against Na Gaeil which proved to be a tight encounter with the play going from end to end.At the final whistle it was the town side who emerged victorious by a goal.
Despite not qualifying from our group our boys performed very well in all the games with improvement shown as the day went on.
Well done to Kevin Mc Mahon and his team who once again ran a very successful and well organised Blitz.
The boys are on the road again on Saturday when they take part in the Castleisland District u10 Blitz due to be held in Brosna with a starting time of 11am.